Half Pixel Studios is a Microgaming Studio Partner that launched their first game with the Isle of Man giant in late summer, 2020.

The release of their first title, Retro Galaxy didn't come with any fanfare from Microgaming, no trade show debut, and no listing on the Partners page. All we know for sure about the developer is that they have inked a deal with the godfather of slots and now have a game available to players in nearly every regulated jurisdiction.

Back in the day when there were only two small handfuls of slot developers, a practiced eye could tell you where any game was actually made, regardless of the brand name it was released under. That is no longer the case with hundreds of boutique studios and factory-level developers on the scene.

The studio's first game has no signature style or mechanic that hasn't been used by dozens of other developers in some applications. The artwork may be "on the edge of awesome" with its minimalistic retro simplicity overlaying a spacescape of star clouds beyond a Tron-like platform, but you are a better curator than me if you can determine who did the artwork. 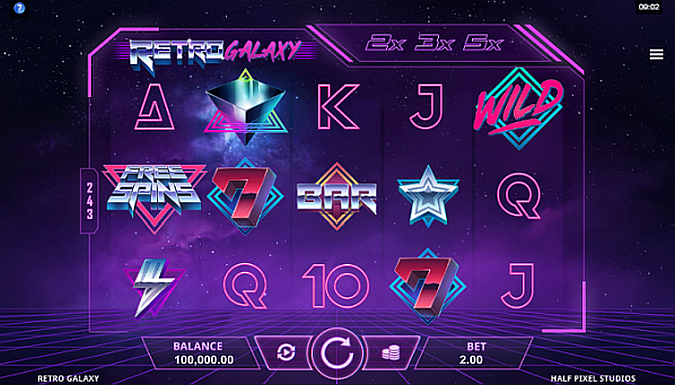 The soundscape is epic, as is fitting for a slot with this theme, marrying retro stylized symbols with something as huge as a galaxy scene. However, any of dozens of score creators and sound effects designers in the motion picture industry or video game arena could have composed and produced it. It is flawless.

Suffice to say, the inaugural release is certainly worthy of a place among the games of great makers in the Studios stable like Triple Edge, Fortune Factory, Stormcraft, and others.

While we've been able to root around and flag a pin in many of the participants in the other studios, even when they were simply brandishing a name for the first time and had been responsible for history-making titles like Mega Moolah, there's not a single half bread crumb out there as of the time of this writing.

With that, we'll assess the developer based on their debut game and hope for more releases soon and try to divine what sort of things we might expect from them in the future. Right now, there's not much to go on except reputation (good enough within the hidden corridors of the gaming world to capture a partnership); originality; quality; innovation, and curb appeal.

The first release was Retro Galaxy - a 5 reel, 3 position video slot with 243 ways to win, and Rolling Reels (cascades and respins) with progressive win multipliers in the base game and bonus feature.

The game loads quickly on desktop and mobile devices without asking for plugin permissions. Since it plays in a browser the engine is HTML5. Since it loads so quickly, that coding is lightweight and lean.

Neon symbols in shades of purple, red, white, and blue are set against purples in the base game and against blues during the bonus feature.

They've made good use of transparency, shading, and 3D elements. The anticipation elements like energized reels waiting for a third Free Spin symbol, the subdued but powerful cosmic lightning in the background when it occurs, and the color change when the bonus game begins all add to a great visual experience. Sound effects execute emotional triggers with mastery.

In the numbers, we see a fairly high volatility game with a theoretical return to player percentage (RTP) of 96.05%. Any sized bet buys all 243 virtual lines and the stake range runs from €0.20 to €20.00 per spin.

In order to hit a screen with the top payout of €146,000.00 you'll need to be in the bonus game with a €20 triggering spin and on at least your fourth consecutive winning spin which pays a 15x multiplier.

The base game pays 2x, 3x, and 5x multipliers for unbroken strings of winning spins. The bonus round awards 10 spins and pays 2x, 3x, 4x, etc with the increased multipliers capping out at 15 times.

It's theoretically possible to reach the 15x multiplier on your first bonus spin due to the free respins. You would still have 9 awarded initial spins to go!

Somehow Half Pixel has been able to craft an exciting new brew of existing mechanics, present them with snappy art and sound, and mix in some highly explosive mathematics for a game that captivates with crescendos of anticipation in a way that belongs solely to this title.

Many of the Microgaming Studio Partners still have scant few titles in their portfolios a full three years into the program. We hope that is not going to be the case with this studio.

The good news for players is that there are about a dozen of these studios. We have reviewed the following labs and studios, you can visit their sites by using the address shown or click through from the top of any of our review pages:

The better news for players is that RNG Foundry, the "gaming accelerator" that does a lot more than a normal business incubator, seems to still be involved in getting small studios with high-quality work up and running with Microgaming and perhaps other major distributors.

Access to Microgaming's Quickfire aggregator platform and remote game servers puts 'the little guy' an equal ground with mega-corporate developers in that their games or even a single game can be released to hundreds of online casinos with the 'flick of a switch'.

The absolute BEST news for players is that Microgaming is not the only top-tier platform provider to open the doors to talent with "studio partners". Yggdrasil's YGS Masters Programme works in a similar way and has accelerated the proliferation of several businesses, teams, and highly talented individuals.

The provenance of more games, as long as they are awesome games, is simply a triple-win for the industry. The big guys diversify their portfolios and please more players - the studios and labs gain access to massive distribution networks - and players can find an increasing number of unique and one of a kind games at the gaming sites they already trust and visit.