Gameburger Studios is a Microgaming development partner with games provided across the Quickfire network through the Isle of Man company's platform plug-in.

Like all of Microgaming's exclusive development studios, there isn't much public information available about the participants.

In some cases, we are able to draw tenuous lines between a few game designers in various other companies through several elements of tradecraft. This time, we are stumped to find anything of much importance.

We find Matt Carvajal to be the Creative Designer at Gameburger Studios, but are unaware of his earlier industry contributions to the industry.

While the studio was hailed as "new" when announced in August of 2019, we find the logo was registered several years earlier in the UK.

While exploring that angle we ran across a name we hadn't considered to be an exclusive Microgaming Studio Partner and will need more research to come to a conclusion as to why they aren't part of the "studios stable".

Just For The Win bears many of the same fingerprints as most, if not all, other studio partners. We also find a Sept. 2019 press release quoting a Microgaming spokesperson with, "...marking the fifteenth game developed by Just For The Win exclusively for Microgaming..."

Be that as it may, we always try to provide one or two important insights in our studio reviews.

With Gameburger Studios, we'll simply have to relay the basics.

The studio has been slow to turn out their contributions to the Microgaming Masterpiece library.

Their inaugural release was a brilliantly enhanced re-revival of the legendary and highly volatile, "Break da Bank", first released in 2008.

The August 2019 rollout, soon after the partnership was announced, incorporates Fusion Holdings LTDs trademarked HyperSpins with a reworked title of Break da Bank Again Respin. Fusion is a Microgaming related company that holds the intellectual property rights to many of their slots titles and gaming mechanics.

The game uses most of the familiar symbology of the original game, Break da Bank as well as the second sequel, Break da Bank Again, with extremely accented visuals and sound effects.

The odds and maths are still written in stone with this 3x5, 9 payline slot. However, players have the option to buy respins on specific reels. The cost to respin one or more reels is directly related to the potential payout.

Got two scatters but need just one more?

Hold those two reels by respinning one of the other three!

The cost will be based not only on the possibility of triggering free games but also the potential value of a win during the feature...

The cost to respin any given reel will also be different based on the other visible symbols and where they are on the reels set.

The cost to each respin is clearly displayed on each reel.

Our first chance to trigger free games paid off. Since there were no other potentially matching high paying symbols, we chose the lowest cost reel, simply gambling on hitting a third scatter.

As luck would have it, within 3 spins we found our match!

Each additional scatter that landed during the free games awarded one extra spin. We ended up with a total of 21 free spins that paid about 20x the triggering bet but about 15x after deducting the cost of respins.

Land three high paying symbols in a row and choose to respin the 4th reel!

Yes, you can, but you'll need to add a new win to collect from paid spins. It may only cost $1 to spin the 4th reel, but the first three paying symbols on a win line won't pay again unless you match up the 4th symbol.

Mechanics include wilds, scatters, multipliers (at least one 5x on EACH REEL), free spins, and player-controlled respins.

Drop-in three or more scatters to add another 5x multiplier to every spin. That means that wilds at 5x will net a 25x overall win on participating lines.

The paid respin feature is not available in free games mode.

Strategy tip: Consider buying respins on reel #1 when you have a 5x wild on reels 2 or 3 and a valuable match for it on any other adjacent reel that could participate in a win. When you have a high paying symbol on reel #1 and a wild on #2 switch to respin #3 - if it's going well, switch to #4 after a win, etc.

Watch those numbers! And know your paylines. With an initial bet of 22.50, three money stacks and a wild (5x) the 5th reel was costing 770.40 - but paid 9,375.00 pushing us past the 5x deposit mark and triggering personal limits 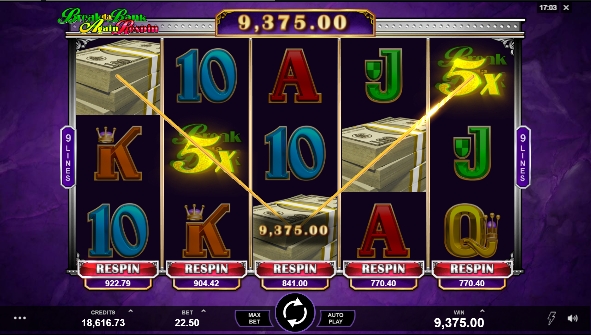 All in all this is a high volatility player's dream. But keep in mind that mean math runs straight through the game like an arrow. Simply triggering free games (and 25x payouts with wilds) doesn't mean you'll hit something great every time the feature is triggered.

There are, after all, only nine potential paylines. But getting lucky can happen.

This game features several built-in mechanics to keep you on tye edge of your seat. There are 20 set paylines on this 3x5 video slot that takes you deep into the African world with cool drum beats and fiery masks of a witch doctor.

The masks each make a decided oomph/thump when they land as do the free spins symbols.

Landing 3 free spins symbols, one on each of their resident reels, 2, 3, and 4 - will trigger a chance to spin a wheel.

The wheel is broken into 10 sections and each wedge has a multiplier and a number of free spins.  The minimum is 10 games at 2x and the best you can hope for is 30 spins at a 3x multiplier.

The multiplier applies to all wins during the feature except masks. Landing three more, as many times as you can, awards an extra set at the same number and multiplier as the initial trigger.

Another mechanic the wild symbol. You'll see a lot of them but usually only on the last two reels. It seems the leftmost reels are not as heavily populated with wild symbols as the reel on the right side of the reel set.

This too builds excitement. When you do finally land a wild on the left side and it is participating in a winning line, your hopes to land the more frequent wilds on the right side rise exponentially. Sometimes your hopes are rewarded, but very rarely.

While not as prolific at producing games as some of the other studio partners, this group has shown they have what it takes to take the bull by the horns. While the second release, 9 Masks of Fire has some features reminiscent of at least one Asian game developer's, the mask scatter are in fact a unique mechanic in their own right.

Taking on a hallowed franchise such as Break da Bank shows just how much faith Microgaming has in the team. The third in a successful series, this offering can appeal to novice and seasoned players alike. Beginning slotters will probably be better off leaving the game alone due to its high volatility.

Novices with some experience may simply play it as a regular slot with all of its inherent potential, and when they have four high paying symbols lined up - and their bankroll is fit for a fight, give a flutter or two on the final reel respin.