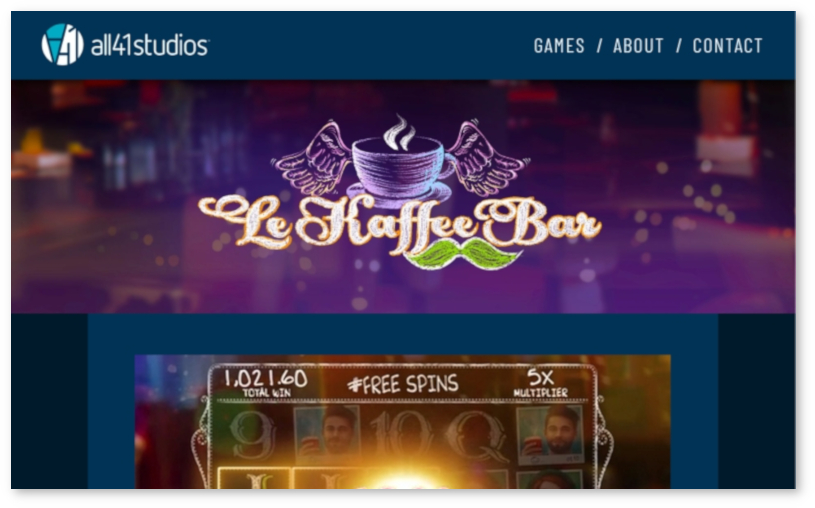 All41 Studios is a Tallinn, Estonia-based casino game developer for mobile and desktop applications. Headed up by Julia Saburova, the company has long and deep ties to Microgaming through her position as a board member of Derivco Estonia, a company that has had a division office at MGS House in Douglas, Isle of Man since 2013. Derivco IOM supports and maintains gaming software and assures its availability.

The studio's website was launched in 2018 and in May 2019, Microgaming announced that the new studio had become one of its exclusive partners. All41 had two games listed on their official website as of the announcement with the first, Le Kaffee Bar, scheduled for rollout at GVC Group brand casinos three-weeks prior to its launch on the full Microgaming partners network on June 5.

The lab joins other previously unknown studios that have produced some of the most famous Microgaming slots in the past with their entry into the Studios program. Some well-known games various other partners have seen the credit for by MGS and themselves include Mega Moolah and Immortal Romance.

To paraphrase the company's "Who We Are" page, they are an eager and enthusiastic game developer located in the bustling technological hub of Estonia. Their focus is on the creation of premium, high-quality real money casino games for desktop and mobile platforms. They indicate that they may deliver art assets, sounds, or game mechanics and that they only provide the creme of the crop, so to speak.

Their mission is stated simply as to entertain, innovate, and deliver.

The talent or at least some of it would seem to come from the great pool of skills available in Tallinn. Economists and tech-savvy observers and investors have been speaking and writing and acting on the strong tech culture of Estonia for nearly a decade. The country's economy started to turn around in 1992 a scant year after their independence, according to a 2013 article in The Economist. Today,  Estonia is known as the "digital republic".

The internet games of today are developed using a host of tools and frameworks, culminating in HTML5 files delivering lean, fast, and feature rich content to players using any modern browser. The framework is 'device agnostic', that simply means that the code doesn't care if you are using an iOS iPhone or iPad, an Android device, a laptop running Mac OS or a desktop PC. It all happens in the browser. All games are available for play instantly.

We expect the games to be distributed using Microgaming's proprietary and pioneering Quickfire platform. In the "old days", Microgaming titles were only available to Windows users who downloaded the Viper program. You can still find some download clients out there, but their games are now aggregated with titles from about 100 other developers and delivered for instant play to any device.

Gaming groups and individual operators can now pick and choose which games they want to offer their players, but more importantly, a studio or lab with just one or two titles can get on the train and see their games fast-tracked to some of the hottest operators on the planet. This was simply impossible a few short years ago.

Look for the All41 Studios splash screen when you load new games from the Microgaming suite of your favorite multi-platform online gaming site.

Le Kaffee Bar is a low volatility game with 96.51% RTP, or theoretical return to player percentage. It's laid out 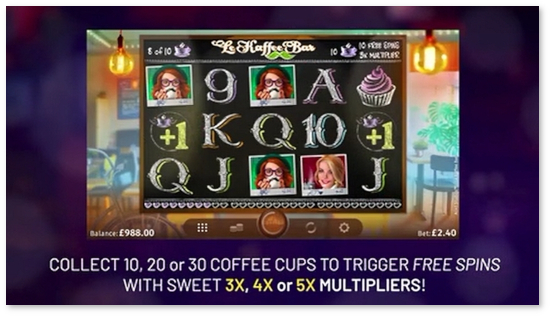 with five reels having three active and visible positions each. There are 243 winning ways rather than traditional paylines. All it takes is matching symbols on adjacent reels beginning with the leftmost position.

The theme is based on coffee culture which is international and should appeal to players of all age groups and location. 243 Ways games have the potential to provide big jackpots, but the fact this title is low on the volatility index, it's most likely that it is a game offering long playtime, frequent smaller wins, and occasional jackpots. 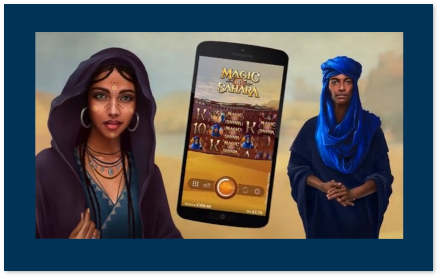 sitting in about the middle of the volatility spectrum. Anything can happen in a game like this, but the paylines are not variable, so you won't be able to adjust the variance at all.

The game explores the arcane mysteries discovered on a phenomenal journey into the great desert. The features focus on the true magical sources lurking just beyond the next dune.

All41 Studios or some of the team, like many of the previously announced Studio Partners, have probably contributed to existing legacy games under the Microgaming brand, but we can't be sure of that. We do find the artwork, sound effects, animations, and feature dynamics to be high quality, if not entirely original in scope or innovation. Of course, it's always possible the team simply emulated the quality of games already found in the MGS video slot library, we will probably never know for sure.

It is nice to see a medium risk 9-line game as one of their first Partner productions, and the other a 243 Ways game. It shows some depth and flexibility, but fixed payline games with a max jackpot that cannot be arrived at through simple maths, sometimes make this reviewer think I'd be better off buying lottery tickets. It could also be a typo on the website with the actual jackpot being line bet ($5) x lines (9) and five of a kind wilds worth 2,400.00 each.

If the first two games are an indication, and we're sure they are, it seems the studio is well positioned to deliver top-notch games to the gambling public in Europe and beyond for a long time to come.