Players from United States are accepted at the casino

Players from United States are accepted at the casino

New Customer Offer. T&C’s Apply. 18+. 40x wagering requirement is required prior to your first deposit. This bonus is available twice to redeem on the account, all bonuses redeemed are combined and will be deducted from related withdrawal. You can play all video slot games with this promotion including progressive slot games. All general terms and conditions apply to our welcome offers including the $10 Maximum bet restrictions. Max cashout: 10xbonus.

New Customer Offer. T&C’s Apply. 18+. 40x wagering requirement is required prior to your first deposit. This bonus is available twice to redeem on the account, all bonuses redeemed are combined and will be deducted from related withdrawal. You can play all video slot games with this promotion including progressive slot games. All general terms and conditions apply to our welcome offers including the $10 Maximum bet restrictions. Max cashout: 10xbonus. 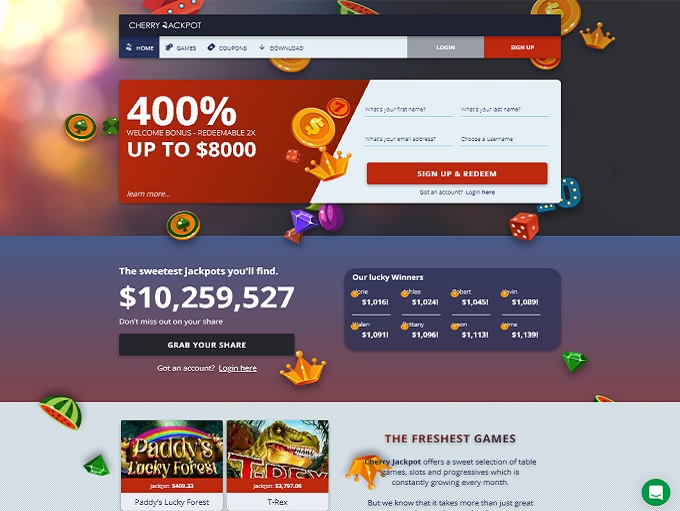 Cherry Jackpot Casino launched for US players and others on October 3, 2017. They run on the RTG platform and carry all of the Realtime Gaming portfolio of online games. It is a sister-site to Casino Max, which launched in 2017 as well. There are good reasons these two haven't been around very long in the greater scheme of things. The important thing to keep in mind when examining Cherry Jackpot is the team behind the scenes, and in a rare look behind the curtain, we'll check in on that next.

Veterans in the industry will be familiar the property's public face from her service over the years. Karolina handled questions and solved any disputes that arose with the Club World group when she was there. Business partners of that group have only great things to say about Martyn B., who handled affiliate relations. One of the former owners of the group is now the man behind these two properties. In a nutshell - two former partners forced him out and then proceeded to ruin the reputations of formerly award-winning properties virtually overnight. It was a fall from grace for the record books.

Given that RTG has been serving players without complaint since the 1990's and almost all properties on the platform are licensed in a Caribbean jurisdiction, Gaming Curacao in this case, what's important is the people backing up a new property. And in about a dozen years of operations, there were scant few complaints and personally, I wouldn't expect any from the new properties. The representatives we've dealt with - several from 'the old days' and a few new faces - seem to be carrying on the formerly famous customer service traditions we had become accustomed to over the years.

The first thing a new visitor might notice is the well-ordered layout of the website. The logo is part of the lettering of the name - and directly below that are four links - Home, Games, Promotions, and Download. To the right - Login and Sign up. The software provider releases games at a good clip so those colorful icons will pop off the screen at you. An unobtrusive chat icon always floats in the lower right and you may be greeted and told that if you have any questions they'll be glad to be of assistance. The most current promotion will take up a good portion of the screen as well.

It takes about a minute to sign up and you won't be hounded for documents. Everything is arranged in tidy little packages on the left. Users have a choice between list and graphical layout once a category such as table games has been selected. All of the games onsite are available for browser/mobile play. You'll get the standard Hastings download if you opt for the desktop suite. Mobile or browser play will provide over 150 options, including all new releases. If you count multi-hand versions of video poker, there are almost 300 ways to play. All games except network progressive slots like Megasaur, Jackpot Pinatas, and Cleopatra's Gold are available to practice or try out for free. It's a good way to get a feel for a new game's volatility before betting your own money.

If you're not familiar with the Real Series games, it's good to know that the money racking up on the progressive meter can appear in your balance after a fireworks display and win celebration at the end of any spin. The prize can be won on as little as a one penny bet. It can be looked at as a sort of lottery - betting $0.20 buys 20x as many chances as risking only $0.01. A small percentage of the RTP is used to fund the prize, much like true progressives, but the exact mechanism is a trade secret, of course. The smart money is on playing these games at a property that won't muck you around when you actually experience the rare stroke of luck needed to see the fireworks!

New places almost always have great offers. Some consistently offer very beatable bonuses. So far it looks like we'll see a lot of chances for new players to take home the money and a consistent level of less lucrative daily and weekly offers for loyal players. No business that is going to actually pay you when you win can be your personal ATM, so that's understandable.

Every place has drawbacks - smart players just have to balance the pros and cons to make a wise decision. I would prefer to see a beatable bonus every time I log in but that is simply not realistic. Also, the next grouse will likely be fixed before you read this - limited banking options. Upon launch, there were only two ways to deposit and two ways to withdraw. eWallets for non-US customers will help them gain more happy customers. There is currently a term that states, 48 business hours pending time for payouts. The last "iffy" thing is that I suppose any new venture has its risks, no matter who is behind it. But given the history and knowledge that's not likely to be a problem either. This isn't 1998 when some operators were foolish enough to gamble their stake in hopes the whole world wouldn't beat their bonuses.

Cherry Jackpot Casino was not started and is not operated by some ethically challenged consultants, starry-eyed youth, or take-down crew. All indications are that this property and any others created later or already under the same umbrella will reclaim the operator's former legacy and give gamblers decades of fair, reliable, and occasionally profitable gambling.

Tony Wells Posted on June 8th, 2021
I am not the biggest fan of RTG casinos. However I believe this and it's sister sites to be some of the best ones .First off they don't allow double free bonuses to be claimed only to deny later. Which is a big deal in principle to me. They have high WR, but a nice cash back offer on clean deposits. I have played here quite a bit more than other rtg brand groups and never had any issues.

There are currently no news regarding Cherry Jackpot Casino.