SpinLogic Gaming is an international online casino game developer. The brand was rolled out in early to mid-2021 as a new title for players in the USA and some other regions. It is expected to replace Realtime Gaming (RTG) in these markets with the RTG name being used in Asia.

We've found documents with the SpinLogic name dating back to January 2015. The legal notice refers to "Spin Logic" and gives trademark permission to operators so that the name and logo "...may be used on your website to indicate that the games offered to your users utilize the RTG software platform."

Interestingly, the company has not put out any definitive information on the rebranding exercise so details are still a bit sketchy at this point. We see the new brand taking credit for a handful of new games released on the RTG platform in recent months.

All of the new games are delivered in HTML5 format for instant play on any web browser, mobile or stationary. The company also still provides a download client for Windows desktops at some of the casinos on the platform.

The software certificate is signed by Chancer's Technology B.V. The company's random number generators received a Certificate of Integrity from Gaming Laboratories International, LLC (GLI) in June of 2017.

That certificate expires on July 10, 2021. It's entirely conceivable that the company names of Nuworks Gaming and Realtime Gaming could be replaced by SpinLogic when the new certificate is issued. However, that is purely speculation on our part.

The firm's game catalog currently resides in a state of organized chaos in that not all games are available on all channels. Some legacy games are only found on the download client for Windows, while HTML5 instant titles are divided between mobile-only and web browsers.

This was either by design or a lack of planning and came about with the demise of the Adobe Flash player formerly used by online gambling providers for instant play slots and other games.

All new games have been released in HTML5 for some time now, so all of them work on any channel; mobile, web browsers on Mac, Windows, or Linux systems, and the downloaded software.

Many of the legacy games, stretching back to the early 2000s when RTG Real Series video slots were developed in Australia, have been converted for omnichannel play. Some, like the legendary Achillies, also had some color treatment and a new mobile-first user interface. 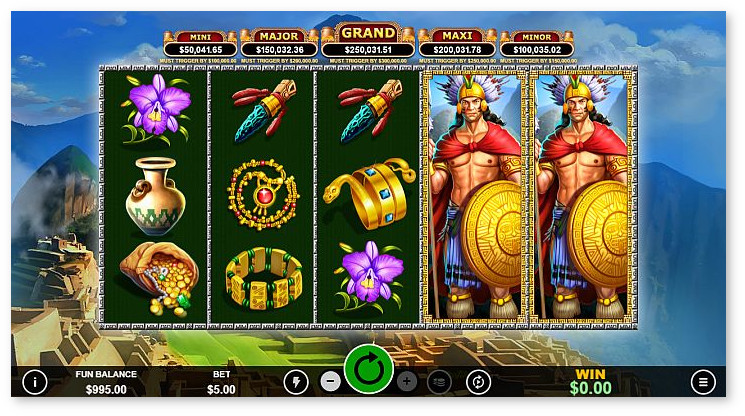 The starkest contrast between the original issues and revamped titles seem to be the "Boiling Point" five-jackpot slot Spirit of the Inca and another network progressive, Megasaur. New art and animation, as well as a fresh user interface, have been deployed on these games.

Aside: Be sure to check out Spirit of the Inca. The game has 5 different randomly triggered progressive jackpots. Each one must payout by a certain level when they reach their 'boiling point'.

SpinLogic rolls out at least one new title each month, and often several are launched each month across the network of sites. The developers have always stayed ahead of the curve with innovative titles, themes, and advanced bonus mechanics.

Three Kingdoms Wars and Shanghai Lights are a couple of Asian-themed games with two-stage bonus rounds. The first set of free spins allows players to collect scatters for feature upgrades on the final set of bonus spins. We don't know at this point whether they will be included in the SpinLogic suite, but they are games well worth your time to check out, especially if you like highly volatile slots with huge potential payouts.

One of the games we see listed on the SpinLogic site is Wild Hog Luau. The game is billed as low volatility but the hit frequency (how a spin gives a winning result) is so streaky that it gives the feel of being a more volatile game.

Free spins can be retriggered and each payout has a randomly assigned multiplier, up to 10x. So this mild little 8 line game with a bet range from $0.08 to $40.00 can provide wild swings and big wins. It's simply a really fun game to anticipate the unique payline configuration completing a winning combination of five of a kind.

Achilles Deluxe revisits one of the most popular games of all time. Most of the bonus mechanics remain the same with a different interface. The major difference between the original and Deluxe versions is the lack of choice in the number of paylines in the newer version. It is fixed at 20 lines.

My personal opinion of Frog Fortunes and Witchy Wins is not favorable. The frog game takes too long for me between action items. Witchy Wins has simply been cruel to me by never awarding a well-paying free games bonus.

Epic Holiday Party is an all pays game with bets ranging from $0.88 to $8.80 per spin. Regular wilds and wild multipliers along with stacked wins give this game a real boost in interest and enjoyability.

My absolute favorite SpinLogic title is Diamond Fiesta - it's very engaging and has been a lucky game for me. Once there are at least six diamonds on the reels at the end of a paid spin or during free games, a new screen appears awarding you 3 respins to gather more diamonds.

While you will get a cash value from any diamond that sticks, you want the designated spots to be filled as it resets your respins to 3 and the reel set is expanded by adding a new one.

The game has 4 reel positions and can expand up to 9 reels wide for a total wipeout of 36 individual prizes - that perfect game would likely award the top jackpot as well.

I think it's safe to say we will continue to enjoy the unique innovations and generally pleasurable playability of slots from this maker. They have evolved as a developer very well throughout the years. While I don't clamor for every single title released, that's to be expected. Over the course of decades, I can really only think of a small handful of games that missed the mark for me. I'm very hopeful that the game catalog will be duplicated, not segregated so I can continue to enjoy Asian games like Wu Zetian when I'm in Canada or America.

If the company releases a formal announcement, World Casino News is sure to cover it and that story should appear near the bottom of this page. As we learn more about the brand's mission we'll inform this article with new facts when we learn them.