Mastercard is a cashless financial processor with corporate headquarters in Purchase, New York, the U.S. The company, originally called Interbank and then Master Charge was created by a consortium of banks in 1966 in order to compete with BankAmericard, now known as Visa.

Before listing on the NYSE in 2006, Mastercard Worldwide (NYSE: MA) was owned by more than 25,000 banks and other financial institutions that issued the branded cards.

The Interbank Card Association (ICA) went multinational in 1968 when the cooperative formed an alliance with Eurocard, giving them access to the European marketplace. The UK's Access card system joined the alliance in 1972 and that brand was retired in 1997.

Other significant milestones in the company's history include the 2014 acquisition of Australia's Pinpoint as well as teaming up with Apple the same year to create a mobile wallet in Apple's iPhones. In 2018, the company patented technology for blockchain (Bitcoin, etc.) payments on credit cards, but did not immediately enter into allowing blockchain payments or other cryptocurrency transactions.

The company provides credit cards, debit cards, prepaid cards, and commercial card products. Mastercard is favored by many consumers for internet purchases including the funding of personal online casino accounts.

The company uses complicated and proprietary analytics including artificial intelligence to combat fraud.

Mastercard uses the 3D-Secure technical standard they call Mastercard SecureCode to protect consumers' credit cards from unauthorized use when making online purchases or casino deposits. After a single registration, a personal code is issued that must be entered each time an online transaction takes place.

In a nutshell, there are actually five parties involved in any Mastercard online transaction: 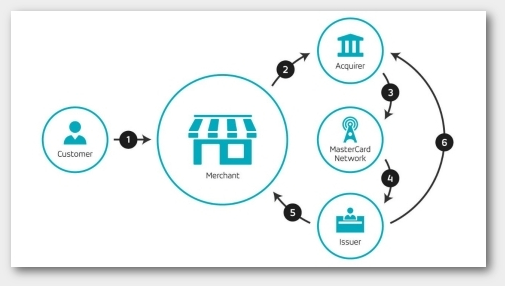 At least four additional steps are added to the instantaneous payment process to authentic the cardholder and to authorize the card issuer without delaying a purchase by more than a few seconds.

At the end of your billing cycle, an invoice is created and a new credit card bill is sent. Consumers can pay it right away or let it accrue interest by making smaller monthly payments later.

Mastercard debit and prepaid account cards work the same way as credit cards as far as the processing and security protocols are concerned. The difference is that rather than accessing a financial institution that has agreed to issue you a certain amount of credit, the funds come directly from your cash balance. In this way, you can never spend more money than you have budgeted or available.

Mastercard is one of the most widely accepted forms of payment processing worldwide, including at online casinos. Some players who use a credit card prefer to purchase a one-time virtual card to make a deposit, especially when dealing with a new operator they are unfamiliar with. This makes it impossible for the processor to inadvertently "double charge" a transaction. This can sometimes happen in unregulated (restricted) jurisdictions when the gateway makes more than one attempt to process the payment discretely.

Some consumers prefer not to have a casino brand name on their credit card or bank statements, and players in certain regions aren't allowed to. When that's the case, other payment methods can be funded with Mastercard, leaving less of a trace for any prying eyes to see.

Some, but not all deposit methods can also be used to withdraw your casino winnings. It depends on your location and the credit or debit card issuer's current policies. If you plan to deposit and withdraw using a Mastercard product be sure to check with your casino cashier section for available withdrawal methods in your region.