Players from United States are NOT accepted at the casino

Players from United States are NOT accepted at the casino 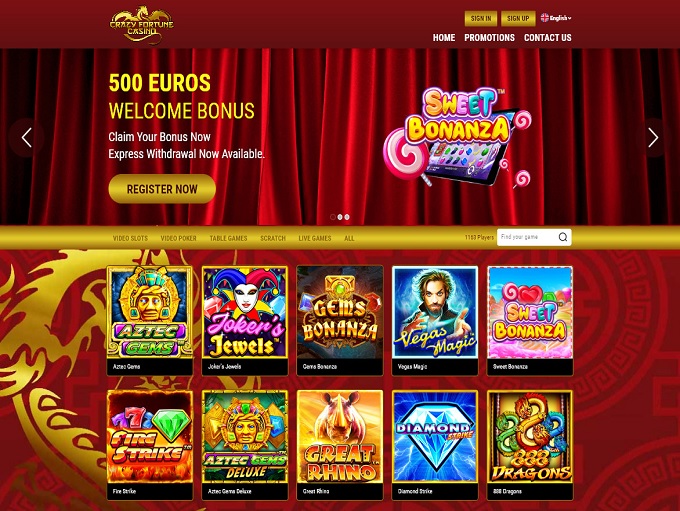 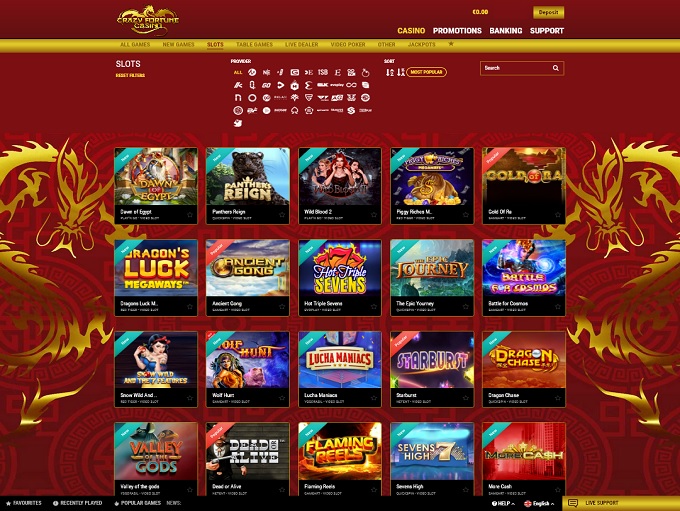 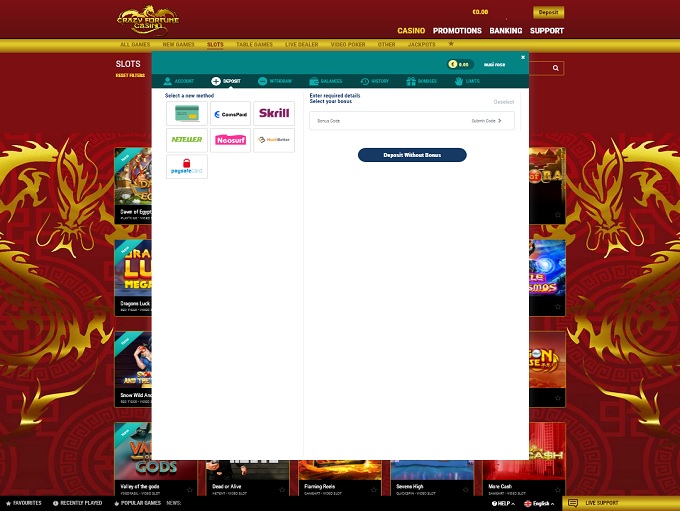 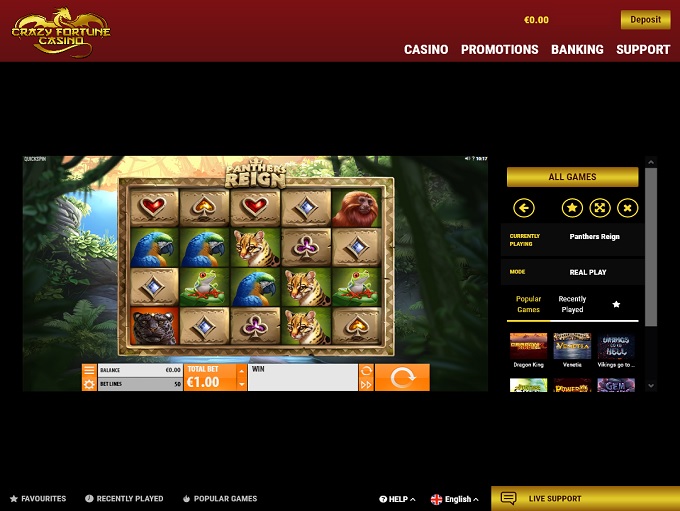 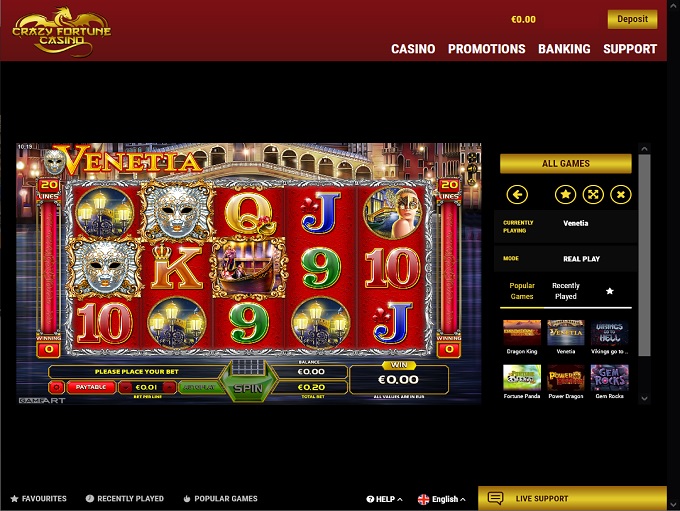 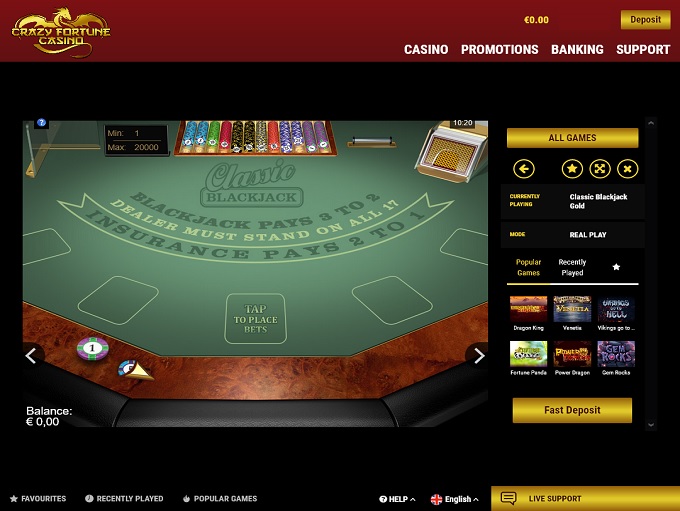 Crazy Fortune Casino (CFC) came online in September 2017 with a bold, fun, and modern Asia-centric look of red and gold. A golden dragon, one of the 12 animals in the Chinese zodiac, is their mascot. Interestingly, the Chinese zodiac is also divided into 5 elements, one of which is metal - the combination of the two is said to represent not only the very best in good fortune but also illustrates extreme possibility and polarity.

The website, which offers nearly 400 games for instant play, is operated by Flavidus Limited of Cyprus. A fully owned subsidiary, MYEG BV holds the company's license which is issued in Curacao. The property is said to be founded by a group of gaming enthusiasts whose mission is to offer the best-loved games from multiple providers in one place. They want players to feel safe and secure with the simple and user-friendly interface and promise a personal approach.

While players from the US and a few CIS countries will not be able to access the website for real money play, people from Germany, the Scandinavian and Nordic regions and Canada, as well as Spain and most other European countries are welcomed there.

CFC is associated or affiliated with VIP Room, not to be confused with the Cleo's VIP Room so-called "sweepstakes" gambling site. However, CFC does offer some games from Oryx, which are found at Cleo's. You'll also find slots from Netent, Microgaming, and Brazilian developer RCT Gaming depending upon your location. NetEnt games are not available on the open market in Canada, so if you access the casino from the Land of the Maple Leaf you simply won't see those games on offer. You will see RNG games from BetSoft and live dealer games from Evolution Gaming and Ezugi studios

Keeping with the theme of melding fun, ease of use, and modernity with an Asian theme that runs throughout, the website is laid out with the user in mind. All tabs are readily displayed and all navigation paths are intuitive and well thought out. It's also very easy to find a particular game or all games from a certain provider using the search and filtering facilities. As reviewed, CFC is offering 380 gambling games provided by Betsoft, Evolution, Ezugi, GameART, HollywoodTV, iSoftBet, Kiron, Microgaming, NetEnt, OneTouch, Oryx, Pragmatic Play, Quickspin, RCT Gaming, and Xplosive Gaming - again these may not all appear depending on your location.

All games are available for instant play on desktop, tablet, or mobile and there is a lot of variety in the offering! Accessing from Canada, there's about a 50/50 mix of iSoftBet and BetSoft jackpot slots along with European Progressive Roulette and a few progressive video poker games. Others are likely to see NetEnt and Microgaming progressives like Mega Moolah as well.

There are more than 40 video poker titles from straight-up Jacks or Better to multi-hand Joker Poker. Most of that number comes from multi-hand varieties rather than unique titles or pay tables though. The iSoftBet JoB has a 6/5 pay table. But don't let that fool you - a Royal Flush with all 5 coins bet only pays 3,000 or 600:1 rather than the customary 800:1 usually seen. iSoftBet is notorious for making terrible video poker games. They appear to be a last minute afterthought the developer added before they became such a prolific slot provider.

The site seems to be very proactive in providing bonus opportunities to the players. Depositors always have a choice on whether or not to accept a promotion, especially helpful for those who don't like to be tied down to wagering requirements. It's a good thing too.
While terms can and do change over time, upon review, the bonus scheme was not very player-friendly for people who like to cash out large sums. According to the terms and conditions, all deposit and reload bonuses are limited to a max cashout of 10x deposit. That's fine if you like to pay to play for fun or have done enough math to determine you'll win at least once in every 10 deposits. Most gamblers don't play to break even.

They do seem to offer depositors a lot of no deposit bonuses and free chips to try new games, but of course, winnings from those are capped as well.

Players can get in and gamble with very low deposit minimums and the cash out threshold is low too, according to the banking page. Players need to skip what it says there and look under withdrawals in the general T&C for minimum and maximum withdrawals though.

Many new casinos launch before every little quirk is worked out, especially when it comes to bonus and banking terms. We'd suggest going with the general terms and conditions and getting any questions you ask answered in writing with any new casino - or whenever there is a question. This, especially when there is conflicting information presented on different pages as is the case here with large differences in the amounts for wire transfers. They also have what we would consider a predatory term, whether they would ever carry it out or not is beside the point: "Should a player attempt to withdraw before wagering has been completed, the bonus and any potential winnings derived from the bonus will be forfeited." As long as you are aware of and never breach that term you should be fine.

Crazy Fortune Casino is a fun, well organized, and aesthetically pleasing site with a great variety of games. The staff seems engaged and passionate about offering guests a safe and secure environment in which to play. Members receive a lot of promos. eWallet transactions are stated as instant, but as of review time, we didn't notice any Bitcoin option. The licensing jurisdiction is weak so, like with a lot of other sites it comes down to a matter of trust.

Their sister-site VIP Room currently has unresolved complaints on at least one major player advocate site, but many of them remain unresolved because the players have not done their duty and returned to answer, while other disputes are fairly new. One of them is only 11 days old but involves a considerable sum of money and the casino has not responded. As always, it's good to look for up to the minute information on new operations. The little kinks can be ironed out at any time and it could be all system "go".

User reviews marked with this logo are syndicated from LCB.org

Sydney
LCB User
Posted on July 2nd, 2020
@epereira - could you please send me your casino username in PM inbox and we'll contact the Casino Representative.

epereira
LCB User
Posted on July 2nd, 2020
much attention to those who will play in this casino they do not pay withdrawals and do not respond to emails which is the only form of contact. I have 820 € played clean I made a withdrawal this pending days and apparently you will continue. Whoever will be playing here a lot of attention and look for better information

hkatd
LCB User
Posted on December 1st, 2019
I played yesterday the 5 free spins on Spinfinity slot that offers this casino! These free spins were wager free so i was so exicted for this !I won from Pyramid Quest for Immorrality 30 euros but i played many hours and i could not made it to win more than 30 euros and in the end i lost it all ! The minimum withdrawal with bank transfer is 100 euros so it is little bit difficult but i played my favourite game so i dont mind i did not win ! I cashed out from this casino and its sister so i am waiting for my next winnings at these casinos !

hkatd
LCB User
Posted on July 7th, 2019
This casino has many positives but one negative !The negative is that the live chat is not always online which i dont like it but in general this casino has good games , they pay and the design of site is awesome ! With few words this casino is cool ! I give 4 stars for this casino !

Garethk1979
LCB User
Posted on March 18th, 2018
Crazy Fortune is one of my favourite casinos, however a few things let them down. The "live chat" is particularly hard to get a hold of. With the time difference to australia they only operate late at night, and evenn then sometimes its almost impossible to reach someone. This is a problem because every time i deposit the bonus and/or the free spins isnt applied automatically and its a huge hassle and delay to get them applied. Once you overcome this, its got a good variety of games and constant deposit matches and spins.

Allstarmikey
LCB User
Posted on September 23rd, 2017
This casino is still listed in the new casino's overview as available for Dutch players ... But when clicking on play now you will get (if your from The Netherlands); Sorry You are not allowed to play from your jurisdiction.

nuuuitsjdragon
LCB User
Posted on September 20th, 2017
Good casino with a must be honoured support that went above duty when I had an issue with cashing out on the no deposit bonuses. Unfortunately, slight lack of technical knowledge caused some issues and I was not able to process a withdrawal because I could not make a deposit (feel this should have been at their end to solve/rectify) Other than that, decent place and worth a try!

There are currently no news regarding Crazy Fortune Casino.