Thunderkick is an established online gaming studio with innovative slots and its own delivery platform [Remote Gaming Server (RGS)]. The company was founded in 2012 in Stockholm, Sweden by a couple of guys who "cared a lot" about creating quality content. The former NetEnt employee's words for their passion are a little blunter, but you get the idea!

The founders have grown the company to a respectable size of about 50 employees while continuing to maintain the original passion for fun and taking the world by storm.

The firm started out with licenses from Alderney and Malta, eventually gaining UKGC licenses for both casino operations and gambling software however Thunderkick Malta Limited has not launched any gambling sites under their Gambling Commission license (41752).

The company picks up every stitch as they weave a tapestry of fair and engaging game development. Individual games, such as Raven's Eye are tested and certified with eCOGRA, with random number generator results certified against Great Britain's Remote Technical Standards.

This brings the testing and certification protocol under the most stringent compliance regimes in the world.

The studio caught its first big break in early 2014 when Unibet signed a deal to carry their games.

Further deals followed including the all-important Microgaming Quickfire distribution network giving players at hundreds of casinos across the globe access to the games and cementing the brand in player's minds the world over.

Since launch, the studio has turned out nearly 50 titles and offers a rare behind the scenes look at everything from game maths to advanced technical details for true slot mavens.

That transparency alone tells you that each game is original, irreplicable, and a labor of love. Rather than hiding the game engines, feature mechanics, return to player percentages, volatility, and maths models behind ever-changing skins - each game is a work of art in all of the disciplines that go into its creation from concept to deployment.

All of the company's releases can be played on mobile or desktop machines right in a web browser. While some less advanced casino platforms may deliver some or all games in Flash - all creations are deployed in HTML5 for play on any device.

Unfortunately, for all of their product transparency, the firm does not offer many business development or proprietary insights via a regular news section or regular press releases. They simply create great games that speak for themselves. In fact, the studio's tagline is straightforward:

We are Thunderkick and we make games.

Most of the company's press relates to game releases, let's explore with a deep dive:

Players who try to compare the games to NetEnt productions or the big studios with tons of money behind them like Yggdrasil may be doing themselves a disservice. The titles do not lag behind the volume leaders in any way, and some games far surpass those two developers as a benchmark.

It's unclear why more of the games do not bear the trademark. We're unable to explore whether the titles were possibly developed under 3rd party development agreements since the former Office for Harmonization of Internal Market (OHIM) registrations have fallen under the European Union Intellectual Property Office since early 2016.

One of the most well-known games, in part, because it appears on many gaming sites' restricted from bonus playlists, is 1429 Uncharted Seas.

One reason this game is not allowed to be played with bonus funds is that it has very low volatility, high hit frequency, and a very high RTP of 98.5%. If allowed to play this game while completing wagering requirements, nearly every player would beat the bonus.

Look for expanding Wilds and a bonus-triggering scatter symbol.

The artwork and splash presentations are old-world depictions of oceanic scenes.

Landing 3 or more bonus symbols will award free games with up to 50 possible spins from the initial trigger and then 10 or 20 more for each additional trigger up to a maximum bonus spin count of 50 turns.

A breakthrough title for the company was Raven's Eye. It's a sleeper with a small but loyal cult following.

The game presents as a 4x5 video slot with 30 fixed pay lines. It includes mystery symbols, wilds, and a Bonus feature with a Mystery Collect feature. The RTP 96.1% and no strategies can affect that number nor the volatility or hit frequency as all 30 lines are fixed each bet.

The mystery symbol Raven Mystery icon and it will be replaced by other symbols. When the 3 or more Raven Mystery symbols appear in the base game a bonus is triggered. More symbols grant additional bonus spins.

During the bonus spins, each Raven Orb is collected to fill meters. When a meter is completely filled, 3 more games are awarded and that symbol becomes a mystery symbol for the remainder of the feature game. 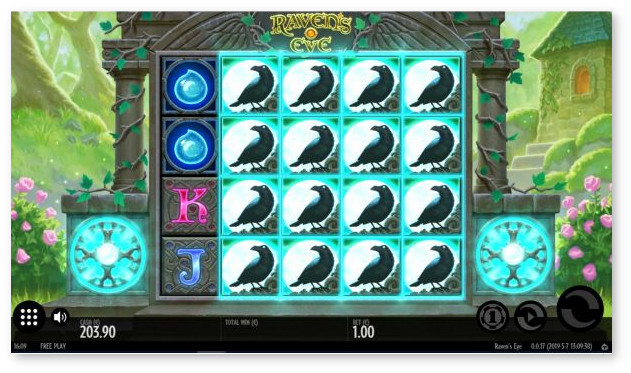 Fruit Warp, Esqueleto Explosivo, and Birds On A Wire are some more of their popular games.

The studio, so far, has stuck strictly to slot development. There's really no need for a developer to branch off and create an entire lobby full of game types under the current business model. There are already hundreds of high-quality table games out there and today's companies can simply "plug their games in" to existing platforms that carry the additional game types.

The Thunderkick AB team has taken advantage of the ever-increasing popularity of its games to expand its portfolio throughout the years. Attendance at major industry trade events such as SIGMA and ICE London most likely facilitate their entry into new markets with new partnerships.

The game quality is superb from top to bottom and front to back. We are actually happy to see the deliberate and measured release of new games. They aren't simply churning out clones with new coats of paint, images, and themes - each is a work of art.

The passionate perfection-driven work ethic seems to assure that the company will continue to turn out market-leading games while created even more "new classics".

Here, we'll answer all the questions you might have about Thunderkick slot games. If we've overlooked a question that you have on your mind, please feel free to leave a comment on this page.

Q: Where is Thunderkick based?

The company was founded in Stockholm Sweden and has offices in Malta.

The game random number generator is certified by QUINEL of Malta, the gameplay is audited and certified by eCOGRA (.PDF), and the company is licensed in Malta, Great Britain, Alderney, Czech Republic, Lithuania and elsewhere.

Q: How do Thunderkick games compare to their competitor's slots?

Each game has at least one unique feature. The harmony of game maths, rich narratives, and elegant artwork, animation, and sound effects set them apart from other developers.

Each player has their favorite features and combinations of features. Themes are a big deciding factor some as well. The studio is able to combine unique mechanics to make each game unique. There are no 'cookie-cutter' clones and each game provides its own adventure.

Q: Where can I play Thunderkick slots?

We find their games at nearly 400 online gaming sites. The ones listed on this page have all been rated by players across the LCB network. They are ranked from best to least favorable, based only on player ratings.

If you don't see a way to locate games by the provider, try clicking on Microgaming or Quickfire and look for some of the games listed here. The Thunderkick logo should appear on the splash screen while the game is loading.

Q: Can I play Thunderkick slots on a Mac or iPhone?

Any device with a web browser and a connection to the internet can access the games. The games are not available in unregulated jurisdictions such as most states in the USA. Android and PC devices can lay all of the games as well.

Nearly all gaming sites that carry their games also offer practice games or a demo mode. Licensing requirements ensure players that the exact same game maths and mechanics are in play whether playing for fun or real money.

Q: What are the highest paying Thunderkick slots?

The following games all pay more than 96% over time. While the following list is by no means all-inclusive, it should give you a good idea of the highest paying games.

Q: Are Thunderkick Slots good for beginners to play?

The variety of games makes them a good choice for any type of player. Novices might like to play riskier games like The Falcon Huntress or Pink Elephants. But if they want high payback games with low risk, then 1423 Uncharted Seas and Yeti: Battle of Greenhat Peak might be better choices.

One good thing for new players is they don't have to worry about line count or any skill features as the line counts are set in stone on most games and the features are all automatic. Many games have as many as 15 bet levels though so bankroll management is about all new players will need.