Their first game as a Studio Partner, Roman Power, was released on June 18, 2020.

The studio was established in early 2019 as a forge and crucible for holistically inspired slot games built from the mathematics up.

Rather than starting with a theme or plugging a disparate narrative and art into a maths model, the engine is perfected first driving the development of the theme, symbols, animation, and sounds.

These elements bring the maths model to life for players to provide an engaging and immersive experience. 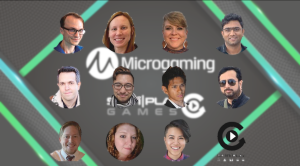 Serena Petersen and Anton Kuhlmann are credited with founding the company. They are both data scientists and mathematicians with extensive experience in teaching and application.

Their paths may have crossed while working at WMS as game mathematicians. Prior to launching the present concern, they formed Jackpot Designs LLC in Nevada to provide all elements of game creation as a third party to land-based, online, and social game developers.

That firm worked on over 100 slot titles, which likely stood as their portfolio which piqued The RNG Foundry and Microgaming's interests.

Some of the game titles the duo worked on over the span of time include:

Others on the team have also worked with the founders, or at least at the same firms. Most of the cross over was from Penn Interactive and Konami, but there is a wide breadth of experience at such diverse firms as Playtech, Yggdrasil, and Rocket to name a few. 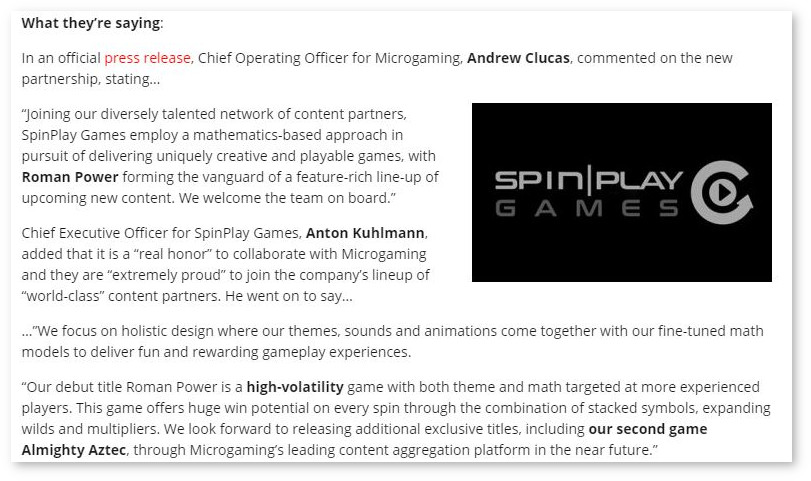 The games are built in java and coded for delivery in HTML5 so they can be played on any web browser with a connection to the internet.

The coding allows the games to "optimize themselves" for any size, orientation, or display quality on a mobile iOS, Android, tablet, laptop, or desktop system.

Like most Microgaming Studio Partners, this shop has a small portfolio. Upon launch of the first game, Roman Power, only one other had been announced as "in the works".

In addition to slots, we are aware they are tooled up and have the requisite talent and experience to produce tier-one Bingo, Blackjack, Keno, Poker, Roulette, and Skill & Innovation Games. However, as a studio partner, we expect to see only slots appear.

Microgaming already has a robust portfolio of table and card games as well as a studio partner recruited specifically to juice up their table game offering. Switch Studios launched its first Microgaming collaboration in early 2019 American Roulette.

Roman Power conjures up the power and fury of the Roman Empire in a mobile-ready slot with huge win potential due to its high volatility.

The theoretical return to player percentage (RTP) for this 20 line game with expanding wilds is 96.18%. Of course, high volatility means you will almost always walk away with only a great memory or with a great win to create new memories with from the proceeds.

All symbols can appear stacked on the 5x3 slot and the Hero Wild can help complete full screen wins of a single icon.

The Hero Wild expands to fill the entire reel during the feature game. These can trigger Power Multipliers to ratchet up the entire win by up to ten times (x10).

Fill all the reels with wild symbols to crack the jackpot and win 4,000x your total bet.

While the graphics and animations are driven hard by the epic soundscape, the magic is still in the math. When all of the elements work together, as they do in this game, the playing experience can be thrilling and make an indelible mark. 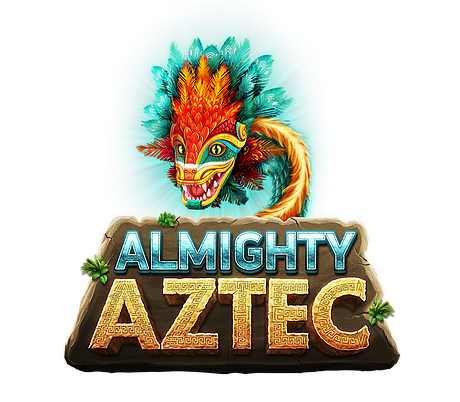 (Fall 2020) Games of history are found in nearly every developer's portfolio. This one focuses on the legend of Quetzalcoatl, the god of intelligence and self-reflection for the ancient Aztecs.  Quetzalcoatl is one of two "creator gods" along with his opposite Tezcatlipoca.

The game is played on 5 reels with 3 visible positions each (5x3). There are 10 fixed paylines, but they pay both ways, effectively creating 20 win lines.

Wilds expand and can be held from spin to spin. When they appear they will land on reels 2, 3, and 4 which guarantees a winning spin when the god graces the reels.

Trigger bonus spins and one wild symbol will fill the third reel. Any and all other wild symbols that appear will expand to fill their own reels and stay in position for the duration of the bonus game.

The game sits near the middle of the volatility index spectrum and offers a top line win of 500x. The RTP is 96.38%.

The staff and management at SpinPlay Games comprise decades of game design and development experience between them. The simple fact that they are operating in harmony with the "Godfather of Slots" speaks volumes about the innovation, commitment to quality, and ability to produce a top tier product.

While we probably won't be able to look forward to new titles on anything like a monthly basis, the games so far tell us that the releases will be well worth waiting for.

We're particularly keen on going back over the list of games the founders' previous studio worked on in a live casino setting to see if we can fathom their contributions to long time favorites - to try to find a common thread as a sort of secret signature. Game maths are far more difficult to divine than paytables or graphics, and so many titles today have multiple elements "jobbed out", it's still an intriguing pastime or hobby. The "eureka moments" are always worth the journey.

Look for their games at any of the casinos listed below. You'll find them under the Microgaming or Quickfire suites. If the SpinPlay name isn't assigned to the game in the lobby, the logo should still appear on the splash screen when you open the game.