Playreels offers several online slots at internet gaming sites. Most of the carriers are Bitcoin casinos.

The most likely aggregator, based on the games' deployment is Slotegrator. However, they may also be provided over the SoftSwiss platform - however, the platform provider does not list them as a partner.

We're unable to find out much about the ownership or management of the company. The game engines, graphics, and maths seem to be closely related to titles published by Platipus. It's possible they are licensed distributors or a subsidiary operation mainly focused on international Bitcoin gambling markets.

Platipus claims that their "RNG [is] certified by iTechLabs according to UKGC technical standards for the jurisdictions of UK, Italy, AGCC, Denmark, IOM, Malta, Gibraltar, Sweden and Romania," so it might be assumed that retitled games from Playreels are certified as well. However, that is unclear at the moment.

The games can be found at such venues as Fastpay, BitCoinCasino, iLucki, and PlayAmo licensed in Curacao. 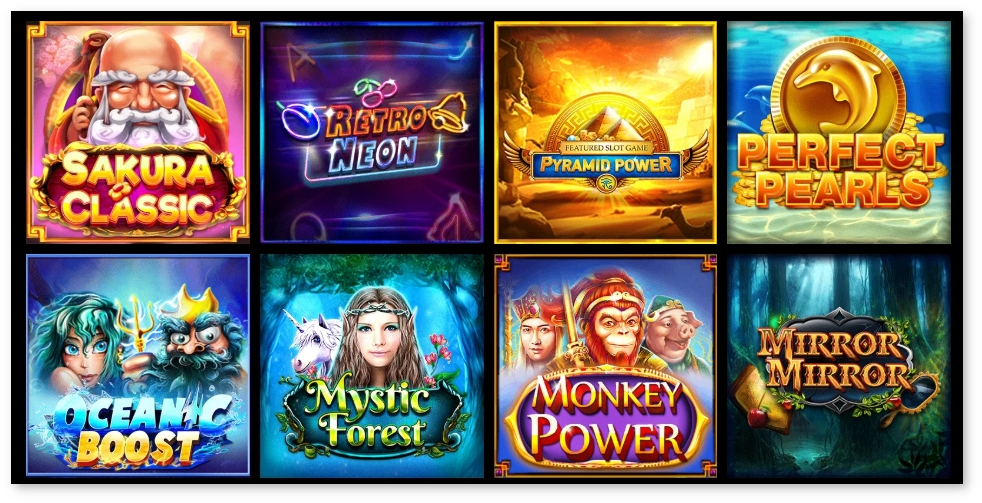 It's not possible to find a proper portfolio of games from the developer as they don't maintain a presence on the web. We do find them through game filtering at some of the casinos that carry the games.

As of review time, there are no table games in the library, but there is a good variety of slots.

The games are developed and deployed in HTML5. This means you don't need to download or install any programs or plugins to run the slots. They play right in any browser on desktop or laptop (PC/Mac/Linux, etc.), tablets like Apple iPad, and any handheld device with a modern secure browser (Blackberry, Opera, Chrome, etc.) running iOS, Android, or another proprietary system.

We might assume the games are created in Europe as many games from Ukraine and elsewhere require two clicks of the spin button to advance gameplay after a winning spin - as do these games. It's most likely a mechanic leftover from a game model that offered all or nothing betting (double up).

A quick double-click after a winning spin sets the game back in motion.

Most if not all titles are also presented with fixed paylines, so if it is a 20 line slot, you must play all 20 lines.

The user interface offers volume control (on/off). autoplay with several parameters, and slow/fast spin. There is also a stop-spin button to speed up the gameplay even more.

Options to view the paytable, game info, and game history are also available under the three-line "hamburger menu" on mobile or desktop. A full-screen toggle is available as well.

The graphics are sharp, clear, and optimized to whatever screen resolution or orientation the user client demands.

Win celebrations are reserved for decent wins and the user experience is not diminished with meaningless animations and graphics when smaller wins occur. We're of the opinion that meaningful win celebrations add value to the experience for seasoned real money players.

Bets range from 0.01 per line to 2.00 per line on the games we tested. The application of "Win level" mechanics is based on multiples of the total stake rather than the total amount won - another "plus" for the games.

Scatter mechanics are bog-standard with no delay in the reel's spinning until at least two have been activated.

Look for an excellent assortment of well-executed games from the silly and sublime to slots made with the serious high variance gambler in mind.

Don't let the titles or iconography and themes mislead you. Some of the seemingly simple games present the player with great opportunities to knock out a hefty cash takehome.

RTPs (theoretical return to player percentages) mostly seem to hover around 95%, but we don't expect any player to put in the millions of spins necessary to find themselves on the outside of standard deviation here.

Rather, volatility is the place to focus with this provider if what you see is what you get.

Wolves of Fortune (Magical Wolf under the Platipus label) offers some exciting game mechanics including sticky, stacked, and expanding wild symbols during the free games feature which is triggered by three scatters landing on the three central reels. 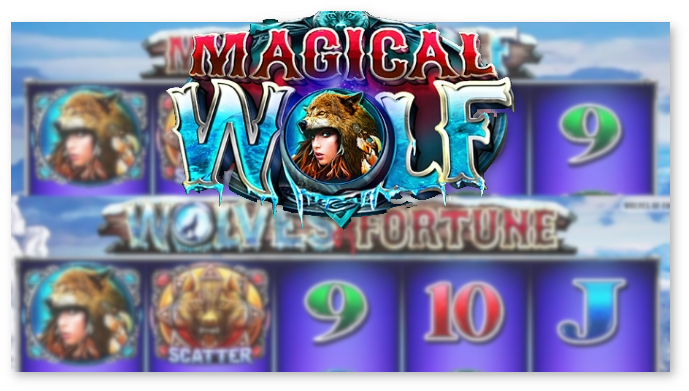 Players are allowed to choose their own volatility whenever the bonus feature is triggered. Free spins can also be added during the free games by landing 3 additional scatters.

Three options are presented for the player to choose from. Players can choose:

As the feature can be extended with a default number of free spins whenever three scatters appear on the reels, and wilds do not count as scatters during free spins, retriggers do not need to factor into the player's choice.

Simply looking at the paytable does not give an indication of which choice might present the best chance for returns. Without access to maths data, we need to rely on 'common sense' without weighting.

However, there's no way to know for sure without millions of simulations whether the choice of 5 free games with sticky wilds is exactly three times as volatile as the 15 game choice with stacked wilds nor if choosing 10 free games with expanding wilds lies precisely in the middle of the spectrum.

The paytable itself doesn't really tell us anything about the inherent variance, but with a range of 150 to 1,000 coins per line for five matching symbols left to right and play experience with most of the larger wins coming from the wolf at 750 coins max payout, we assume that the volatility index is medium to medium-high.

Again, without knowing how much of the 94.99% RTP comes from the bonus feature on average or for any individual component of it, and not knowing the actual hit frequency of the base game and feature mechanics, that is only a semi-well-reasoned guess.

Modern game maths, especially those associated with fixed-payline games, can throw such 'man on the street' reasoning on its head.

Since the mathematics all reside behind a fixed number of paylines and it is impossible to map the reel strips on any of the slots for simulation purposes, the 243 ways to pay Retro Neon with harmonized reels may be as good of a game as any to look at next.

Bets of fifty units ranging from 0.01 to 2.00 each are accepted on the 243 ways to win "tribute" to Neon Classic from Platipus.

Stacked symbols, wilds on all but the first reel, and a guarantee that at least two adjacent reels will be identical add up to some real winning possibilities with this 5x3 "United Reels" game with a 95% RTP.

Each spin will generate at least two identical reels next to each other. During the spin, more reels can be added to the feature with the potential for all five reels to contain the same symbols in the same order of appearance.

The United Reels are generated at random with no player control or ability to anticipate the feature.

While that sounds like a sure way to win, it isn't always the case if the first reel doesn't match up with four or less reels on the right side of the reel set.

As can be seen below, lucky spins are certainly possible! The three central reels were harmonized while a matching high paying symbol appeared on the first reel and was augmented by a wild symbol on the last reel. 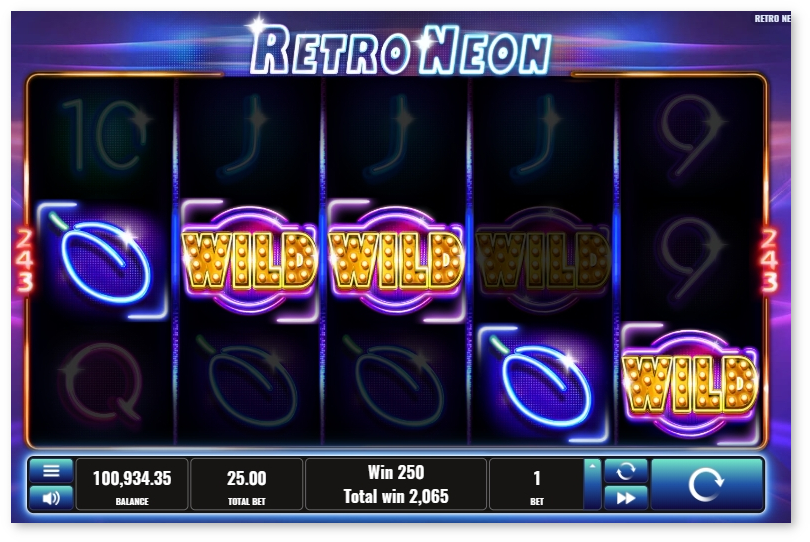 Any three or more matches on adjacent reels beginning with the leftmost reel will generate a win.

As symbols can appear stacked, even on the locked reels, the low returns (three symbols at 25x coin-size for five matches, three at 40x coin, two at 250x and then 400x, 500x, and 1,000x) are not very meaningful as every winning way is paid.

While we won't dig to see which came first, the concept and game mechanics are very similar to Slotland and Win A Day's proprietary Neon Reels. Three notable differences are that Neon Reels may only generate one locked reel, it offers free spins, and wild or double wild multipliers can appear on the locked reel(s).

While we played less than 20 games and only analyzed two in any depth, we find this offering to be more interesting to novice players or those who are more concerned with the experience than the maths of the games.

In our opinion, fixed payline games are basically lottery offerings with far better odds. However, Playreels has shown the ability to build excitement into their slots.

UKGC licensing and their attendant certification protocol do not care about how RTP is arrived at, as long as it pays the statistically average player in the long run.

Player choice during bonus features did not seem to affect total RTP in the limited number of features we explored.

We see awesome graphics, but not much truly original in gameplay.

The firm is non-transparent but we might assume the games have been tested and certified under their other brand names.

What you see is probably what you get here, pretty pictures, unimaginative game maths, and no tacitly provable game fairness.

That said, we would and do play these games, but they aren't a go-to library, mostly because of the fixed number of paylines.