Fugaso (short for Future Gaming Solutions) is a Cypriot iGaming company with offices or facilities located in Malta, Russia, Israel, and the UK.

Founded by Niko Mazger in 2001, the company shares a business developer with Groove Gaming, Robert Metzger. This development seems to coincide in time with the company entering the market.

Look for the games at all casinos listed below. They can be found at Space Lilly, Betwinner, King Billy, and many others. Over 75 sites carry their games.

The game library consists of more than 70 titles, with frequent new releases fattening that number up nicely on a regular basis.

The litany of partnership and distribution deals they have crafted to get an impressive portfolio to market is too lengthy to mention here.

However, through those partnerships, their global footprint consistently expanded from Europe with EveryMatrix and SoftSwiss to South America with Patagonia Entertainment. About the only place you won't find their games is in the USA, for now.

All of the company's titles are produced and delivered in HTML5. The omnichannel, web browser-based games can be played on any device with any operating system.

Android and iOS mobile devices automatically optimize the content just as the browser on any laptop or desktop system does for the best user experience possible.

Card and table games, classic and video slots, as well as jackpot slots, fill out the studio's game library for desktop and mobile play.

The company chooses themes from popular culture for some of their games, giving them an up to the moment feeling of freshness. Hopefully, these titles will age gracefully.

Other titles are common to the realm with unique twists and variations as we'll see in the following descriptions.

The "Trump" games depict American political figures on the cards, and the "Neon" games focus on the color purple in a neon glow. Look for more humorous political themes in the slots catalog as well.

More than three dozen of their games use a progressive jackpot model. The games have been tested by QUINEL Lab to pass UKGC level requirements and are licensed by Malta.

Each game has a mini, a midi, and a maxi jackpot. The same progressive component is "plugged into" each of the games.

The first progressive games announced were existing video slots that were retrofitted with the jackpot component. Subsequent titles may have been built around the model.

As well, the games can cycle through both the progressive and the non-progressive catalogs simply by unplugging the jackpot component and returning to the original maths.

Book of Tattoo 2, Stoned Joker, and Trump It Deluxe as well as Stoned Joker 5, The Mummy 2018, and Mega Power Heroes currently reside in the jackpot suite along with many others.

Book of Tattoo 2 celebrates body art and its historically newfound popularity among people from all walks of life.

Rather than having traditional paylines, the game features 243 ways to win. This is the total number of possible winning combinations leftmost to right when requiring 3 matching adjacent symbols.

Bets range from 20 cents to 40 Euros per spin. Locked Mystery symbols with respins, scatters that trigger bonus spins with extra triggers, and the progressive jackpots add to the game's visual appeal.

Stoned Joker 5 is a cannabis-themed slot with fruit symbols, scatters, and a gamble feature. Five reels with 5 paylines across 3 rolls along with three progressive jackpots and a pinball game sound effects scheme give the game a certain charm and big payout potential.

Each of the jackpots is fed with a percentage of each bet placed. When one is won, it is reseeded at a starting level and begins growing again until won.

While the progressive jackpot feature is common to all of the jackpot series, the games couldn't be more different.

Look for everything from 3-reel classics to 7 reel thrillers like Imhotep Manuscript.

Most of the games are 5 reel set-ups with various line counts. Unfortunately, the company's website doesn't list all of their games, but demo play is available there and at most of the online gaming sites that carry the games.

One interesting hybrid is called Cash Machine. It looks and works like a physical 3-reel slot but has 5 rolling reels and five paylines.

"Olympia" was released as both a 3-reel 'mechanical' and a 5-reel game video display title.

active payline awards a picking game. Choose two of the beach girls to claim your prizes, if they are the same amount, win 2x the total.

However, the best reason to play this game is the volatile scatter feature. Five scatters pay 1,000x total bet along with a bonus spins award with 2x multipliers.

Clash of Gods ticks almost all the boxes for a 21st-century online video slot. The only thing missing is a variable line count, but no developer has released a 243 ways to win game with infinitely variable ways to win.

The game draws its theme from Greek Mythology but doesn't rerun and tread the theme. The artwork is awesome and the mechanics, as well as sound effects and animation, keep the game exciting.

The narrative is found in the name, telling us this is no theme centered on the human struggle with the gods, but on the furies of the gods themselves amongst each other.

The cast of characters in written in stone so expect to see Artemis, Hephaestus, Athena, Hades, and, of course, Zeus.

Like all of the jackpot series, this game nicks a part of each bet to feed the pot and make some lucky players very happy. Bets range from 0.20 to 40.00 per spin buying all possible winning ways. The mini jackpot contributes 2%, 1.5% goes to the midi jackpot, and 1% is contributed to the maxi pot.

That's 4.5% of every bet going to feed the jackpots, so they grow quickly and should fall often. However, the maxi pot is currently approaching one million last time we looked.

The mystery symbol mechanic is used in this game as well and can morph into any of the other visible icons to complete or create new wins.

When mystery symbols land, they lock in and trigger respins until no more symbols appear - potentially filling the screen with any other symbol at random per the maths.

Greek letters award most of the wins, but the god icons are plentiful on the reels.

When you trigger bonus spins, mystery symbols will also stay in place for the duration of the feature round.

Two extra spins are awarded when 2 mystery symbols land on a single spin. 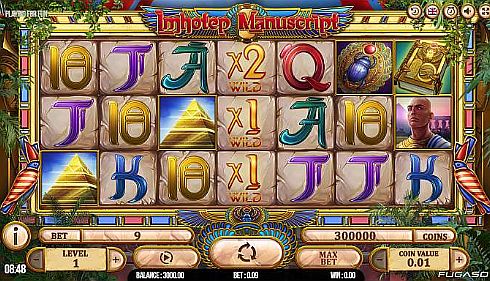 Imhotep Manuscript is a beautifully rendered Egyptian-themed slot with 7 reels and only 9 staked lines. However, the game pays leftmost to right as well as right to left giving you 2 lines per bet unit. Bets range from 0.01 to 1.00 and up to 10 coins per line ($0.09 - $90.00) per spin.

The central reel contains only wild symbols and all of them are 1x, 2x, or 3x multipliers.

The central reel remains wild but multipliers go up to 6x during the feature game.

With an RTP (theoretical return to player percentage) of 96%, we would play this game simply for the awesome artwork and interesting mechanics - the jackpot prize is an added bonus.

Divine Carnival was the first of many releases in 2020, and it is a stunner. Depicting the Carnevale di Venezia which ends on Martedì Grasso or Mardi Gras.

While the Brazilian Carnival and New Orleans' Mardi Gras parades and festivities are known the world over, the Carnival of Venice is oddly, perhaps not as well known outside of Europe.

This 5x3 slot with 25 paylines running both directions (effectively 50 win lines) pays homage to the festival first began in 1162 and only returned in 1979.

Payouts range from 2x to 500x line bet in the base game.

To trigger the feature, simply land a scatter on the first reel to get a respin with scatter and wilds locked on the reels. When a scatter lands on the last reel, 24 bonus spins are awarded.

During the bonus games, an especially powerful wild feature can be activated from the middle of the central reel.

The game is a little top-heavy, even for HTML5, but if you have a decent connection and enjoy games with plenty of pageantry as well as high payouts, this one is worth a spin! 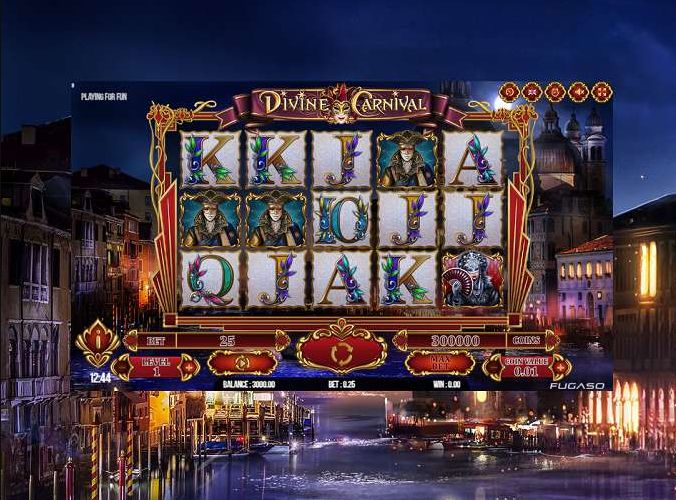 Fugaso seems to be doing everything right to make it in a highly competitive marketplace.

While the games speak for themselves once you find them, the developers also attend the major industry trade shows and make themselves available for interviews when major developments occur with the company.

We like the wide range of game configurations, math models, and new takes on old themes as well as their willingness to explore novel narratives.

You can find in-depth game reviews as well as rated and ranked casinos to play them in demo or real money mode below.