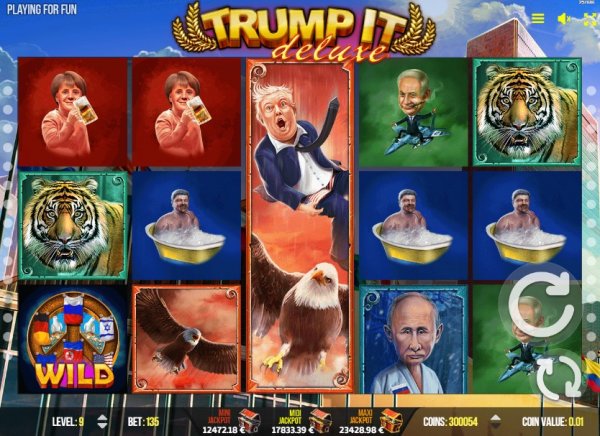 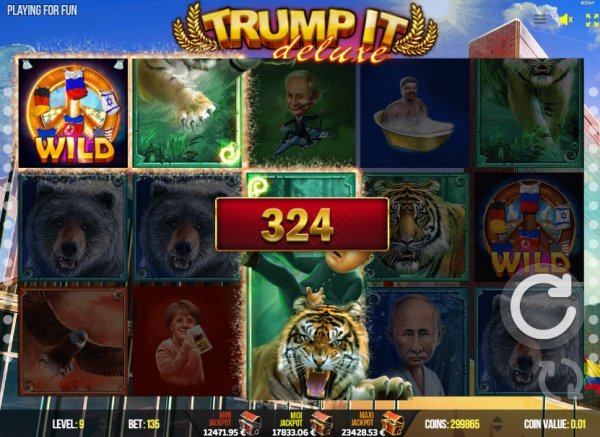 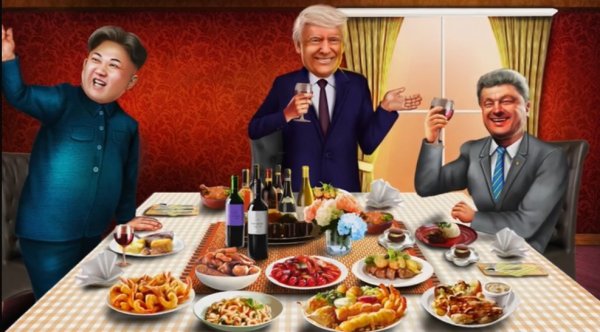 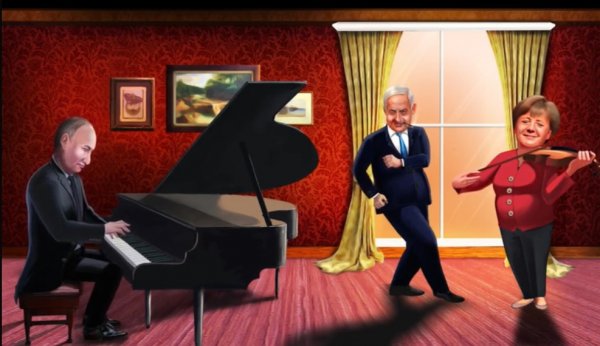 Well, you’ve probably never seen a slot like this before. Trump It Deluxe slot by Fugaso is a funny politically-themed slot that has a really massive selection of different bonus features. If you are a true fan of the politicians appearing in this slot, you’ll enjoy it even more.

As we already said, this is a politically themed slot, where the main characters are the president of the United States Donald Trump, Russian president Vladimir Putin, and North Korean president Kim Jong Un.

They are represented as three highest-paying symbols…

…while there are also three animal symbols and three more politicians acting as lower-paying symbols.

The graphics and animations are really amazing and they really contribute to the overall enjoyable vibe of the game.

This is a 5-reel, 3-row video slot with 30 fixed paylines. The bet size is 15 coins and there are also 10 different betting levels (the number of coins per bet line)…

…that increase or decrease your betting amount.

In this slot, there are also three different Scatters, and each Scatter symbol has a Bonus spins game associated with it. 3 or more Scatters activate bonus spins feature. If they are not activated after re-spins, you have one last chance to activate them.

The blue Scatter gets you Bear bonus spins, where only politician and animal symbols are present and a new Scatter on reels adds 3 extra bonus spins.

The green one gives you Tiger bonus spins, where additional Scatter increases a multiplier x1 for each Scatter…while the red Scatter awards you with Eagle bonus spins in which the Scatter becomes a Sticky Wild during bonus spins.

Basically, the initial Scatter gets you either 3 Bonus spins, 1 Multiplier or 1 Sticky Wild. The bonus spins feature awarded to the player will be determined by the type of Scatter symbol and, in the case of Eagle bonus spins, the position of Scatter on the reels is also relevant.

Re-spins are awarded when 2 or 3 same type Scatters appear on the reels. They can appear on reels 2, 3 and 4 …while they can also appear on all 5 during Re-spins.

If the Scatters are the same, re-spins will start immediately. But, if they are not, they start to randomly transform into the same symbols before the re-spins start.

…one of them is randomly chosen after a battle to transform into another symbol so that they are both the same before re-spin starts.

There is a 50-50 chance of which symbol will be chosen as the active Scatter symbol.

If 2 same Scatters appear on the reels with one different, after a battle they will transform into the same type prior to re-spins. There’s a 75% chance that the symbol with 2 Scatters will be the active one.

And, ultimately, if 3 different Scatters appear, they will transform after a battle into the same type before the re-spins. This time, there is an equal chance for each symbol to become the active one.

This is really a great and innovative slot that will attract many players thanks to its theme and many bonus features. We definitely enjoyed the funny animations and nice wins that came along with super fun bonus games. You’ll for sure enjoy it as well.


You can play Trump It Deluxe at the following casinos