Old Skool Studios (OSS) is an online casino game developer launched in 2009. The Vancouver, BC, Canada-based company, founded by Mike McGraw is still privately held and employs about a dozen team members in Canada.

The labs have always focused on quality over quantity with a fairly slow rollout of premium games.

Their first big hit was 2014's Epic City slot. The title was picked by up tier one operators like Leo Vegas, Mr Green, bet365, Unibet, and Gala/Coral. 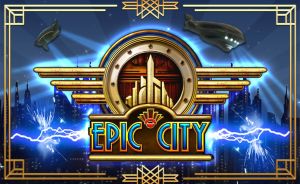 While maintaining a focus on real money gambling games, the company has also been seen to produce social gaming and hybrid titles. Zynga is one of their social clients.

iWin partnered with OSS to release a real-money version of their popular Jewel Quest match 3 game over the Microgaming Quickfire network in late 2017.

Further collaborations include working partnerships over the years with the likes of Rocket Gaming, Lost World Games, GameHouse, Neowiz, International Game System Company (IGS), the BC Lottery, and EA.

Many of the games were developed through LM Design Werks, the company's services studio. This is a common path for many companies including Lightning Box, another company that developed world-class games as a third party prior to claiming their own brand name.

The firm has had a web presence since late 2011 and announced an outsource agreement with rocket games to produce "Magic of Isis" less than two months later.

By the next April, they began design work for British Columbia Lottery Corporation, and in May, Magic hit the 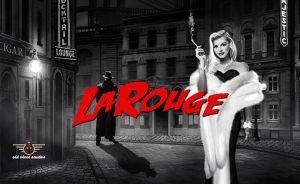 They next inked a deal with social provider GameHouse Casino for four titles. The games were launched over the course of the next year.

Things started getting real in the money games space when they attended the Global Gaming Expo in Las Vegas in late 2013, in by December they were developing a handful of steampunk mobile apps for Microsoft, released in early 2014.

They returned to G2E in Las Vegas in the fall and release Epic City on the ill-fated Odobo platform in October.

In late 2014 they had begun releasing their own in-house HTML5 games, well ahead of the curve. bet365, Unibet, and IGS picked up the titles on the O platform. The next year LeoVegas and Zynga opened their doors to the developers.

Casino Cruise picked up their collaborative effort with IGS with their release of the jackpot-driven Flush Fever video poker game.

Gala, Coral, and Lost World Games were next on the path King of Kaiju: Rampage Riches.

Returning to G2E for 2015 seems to have helped them launch games at Prospect Hall, Betmotion, and Mr Green.

Odobo closed up shop in December 2015, and like many developers on the platform, the studio sought solid ground again. After a release over White Hat Gaming in May, their landing came with Microgaming Quickfire in mid-2016, and the rest - as they say, is history.

Old Skool is now an independent first-party studio in the Microgaming family of studios. The deal closed with technology accelerator RNG in 2019.

All of the company's titles are published in HTML5. This allows players to access the games on any device with a web browser. No special software or Flash plug-ins or permissions are needed.

The shells are configured to accept play in multiple currencies with over two dozen language versions available.

The Quickfire platform can be the sole game delivery software an online gaming site uses, or it can simply act as an aggregation tool. In short, Quickfire can be plugged into nearly any other platform, and operators can choose which games to offer players, or offer them all.

What that means to players is that although the portfolio of titles is small, they can be found in the slots lobbies of nearly 100 online gambling sites.

No matter where you are located, in open regulated markets (sorry no USA) you will find the games. Finlandia, Casumo, 7Bit, Hello, Chanz, and SlotsMillion are just a few of the places you should see them.

You will find a list of reviewed, rated, and ranked gaming sites that carry the games below.

This game takes you back to the glamorous 1930s with a futuristic twist. Old-time jazz, airships, and spotlights sweeping the sky all set the mood for this epic game.

The bonus feature in this 20 payline, 5-reel game comes with five stages. There will be no doubt when it is triggered as the screen comes alive with lightning. 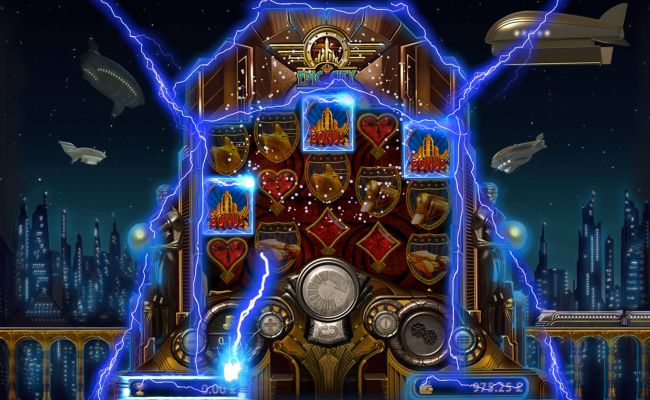 Your main goal is to restore power to the city by resetting electrical fuses/breakers. Each successful reset will award a prize. Win all, collect and be done, or advance through the story.

Look for up to 20 free games with prize triggers and extra stacked wild symbols. You'll get there by spinning the wheel a mini-game which can award up to 10x multipliers to your free spins. Retriggers are available.

Try the gamble game by betting on colored orbs with a 50/50 chance of doubling your winnings.

The game is a thriller and well worth a spin or 300 to get in on the excitement.

This game utilizes the classic film noir theme. Welcome to Hollywood in black and white with red accents. The art seems to be inspired by the minimalistic comic art of Frank Miller. Think Sin City in the pulp or on-screen and you have a feel for the games' ambiance, sans the violence. The splashes of red color in this game are kisses and stars, and other nice things. 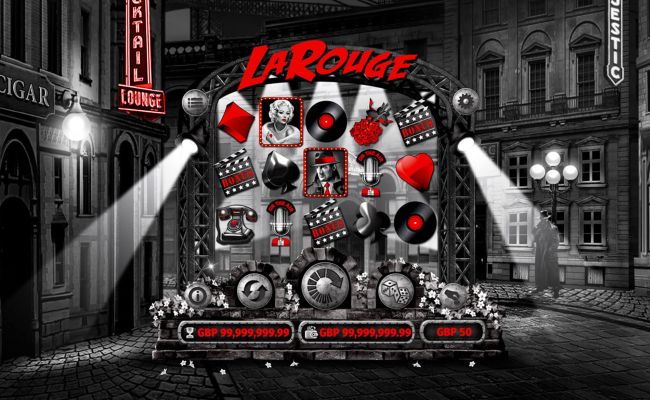 Another five-stage picking game is featured when the bonus is triggered on this 5 reel, 20 payline masterpiece. The period music is swinging jazz. You'll use the Starlight "lift" to navigate bonus levels and find the green room party.

Choices and luck along the way can earn you up to 20 bonus spins with added wild stacks. The screen will reveal a spin multiplier up to 10x and bonus spins can be triggered again.

Predict red or black in a 50/50 double or nothing gamble game and paint the town.

Jewel Quest was a wildly popular Match-3 social game. Old Skool picks up the franchise with this real money gambling game. Chain reactor fans and those who like puzzles and gem-swapping games will enjoy this title. As the game progresses, multipliers can go as high as 12x. 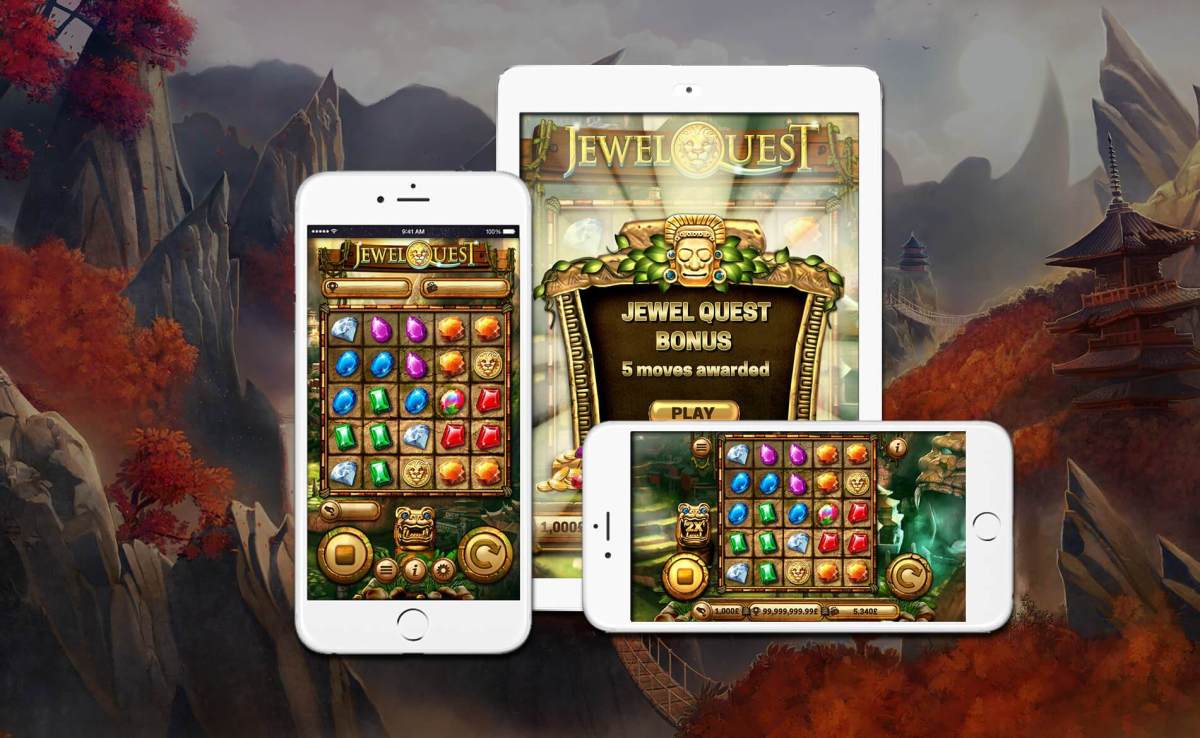 We go back to the future again with this 5 reel, 20 payline cyber-futuristic game in a steampunk world. The game is captivating and immersive, and firmly hits the nail on the head to capture to studio's tagline: 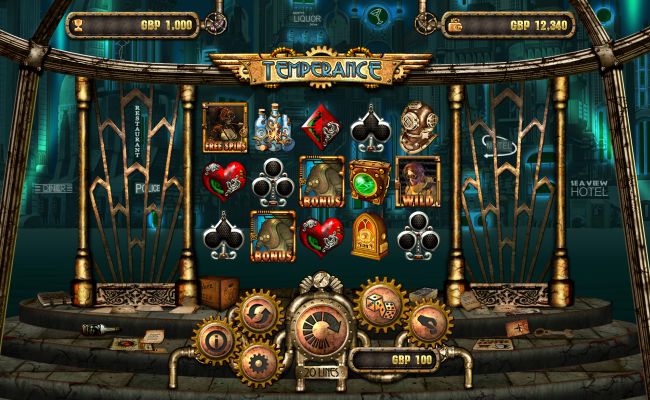 The animation carries the narrative along with the sound effects. Trigger the bonus to spin a Multiplier wheel to win up to 10x multipliers and retriggering on eight to twenty bonus spins.

The gamble game awards 2x winnings or forfeits them with a 50/50 chance to double your money.

Maui Mayhem appears to be the first game to release as a Microgaming Studios partner title. You can find it at the casinos listed below.

Old Skool Studios produces very few games, but the ones they do release are stone-cold perfect. The endorsement of being invited into the Microgaming family speaks volumes for the company.

There are hundreds of labs and studios out there. We like the fact that they have chosen quality over quantity in developing their library. When a small handful of games can appear on dozens and dozens of gaming sites, their distribution network has covered the quantity angle.

We look forward to seeing more titles in the future and will seek them out among the troves of slots available online.