Every once in a while a true contender for prominence in the online gambling sphere makes itself known. Nearly all studios and labs are passionate about their crafts and the science behind their works, and it’s an extremely competitive marketplace. There are perhaps dozens of elements that must all come together in synergy to catapult a name into the minds of operators and players and to gain traction on a long-lasting trajectory to the top.

Golden Rock Studios seems to be one of those distinctly qualified entities with ‘what it takes’ to stake their claim to the apex of game development and operator satisfaction. To understand why we must look not only at the company’s products but at the team and especially the leadership behind them.

The firm was co-founded by heavy hitters, James Curwen and William Mathieson. While not everyone will be familiar with those names, many readers will be aware of the influences the two have brought to bear on the gambling industry from their respective leverage points. 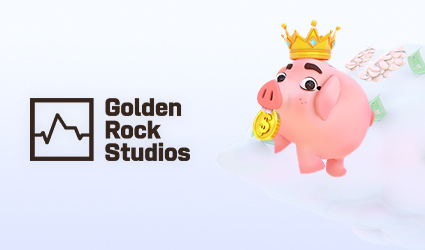 James Curwen made his first indelible mark in the industry as the Casino Manager and the Ritz Casino and Hotel in London’s Mayfair district. After 8 years he became Casino Director at Ladbrokes and then worked in consultancy before coming on board at William Hill where he was Chief Product Officer among other top-level duties for nearly 6 years. Superbet had the pleasure of using his expertise to reimagine the company’s operations and strategy which he accomplished in only 8 weeks.

In January 2018 he got together with Mathiesen to launch Golden Rock Studios and they released their first game over the Microgaming Quickfire network in late 2019. Plans for 2020 include an average release of one new game each month and being positioned in the top tier of providers before the close of the year.

Willaim Mathiesen is known to industry insiders as the creative genius responsible for more top-performing slots over the last seven than anyone else in the industry. The CPO comes on as a leader in development with the intelligence and ability to harness the creative energies of those around him and focus them on brilliant maths, mechanics, and user experiences. Games that he has led in the development of include Gorilla Go Wild, Genie Jackpots, Centurion, and Wish Upon A Jackpot among many others.

Mathiesen spent over 9 years at William Hill, first ‘paying his dues’ as a games test analyst before advancing to the positions of Product Development Executive and Slots Operations Manager, before heading up gaming development for the brand for nearly 3 years prior to launching Golden Rock Studio with WH's Chief Gaming Product Officer, Curwen.

While the C-Suite is always an extremely important element in a company's success, two alone cannot change the world without the usually unsung support of a brilliant team.

Terry Wilson is the Head of Maths and his contribution includes the experience of over 6 years working at CORE Gaming Ltd after developing games under contract for Astra Games and JPM International for the previous 4 years.

Ash Hier is the Tech Lead at Golden Rock, a game developer with extensive HTML5 experience, most notably with the Endemol Shine Group where he produced instant win and slot games for the company.

Federico De Marinis is the firm's Sound Designer. De Marinis is an A&R music label owner, and an accomplished mixing and sound engineer with over 10 years of experience plying his trade in Italy and the UK.

Angelo Mazzone is also a sound designer and Audio Producer who has worked in live radio and directs the label he founded, ANMA Records in the UK.

Reinholds Sprogis is an Associate Producer with previous experience at SG Digital (Scientific Games), Superbet, and Will Hill. While in Latvia, Sprogis also did a stint as a live casino game presenter with Evolution Gaming.

The company's Creative Director is Duncan Paines, he also leads up UX & UI (user experience and user interface). In addition to services performed for William Hill, Paine has also worked on projects for well-known consumer brands such as Nokia, Samsung, Huawei, Speedo, HSBC, The North Face, Kellogg’s, and Coca-Cola to name a few identities he has helped shape consumer awareness of.

While we can’t go too deeply into the backgrounds and roles of other highly integral members of the team, we hope that sharing what we have already, gives readers a little more insight into the company’s depth of talent, skill, and ability.

A look at the talent tells us that we can never expect to see reskinned games or clones - they simply wouldn’t need more than a brother-in-law’s kid working from a basement overseas to accomplish that. We can expect to see all table games and slots designed to the highest standards of multi-platform availability. No potential customer will be left behind by technology.

While the games are designed “mobile-first” they are also available over any other channel thanks to the frameworks they are built on and the HTML5 tech they are deployed with. In a nutshell… any game can be played on any device, regardless of the operating system. 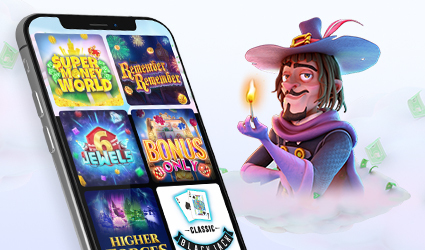 We can also expect to see unique game features and bonus mechanics found nowhere else. Gone are the days of throwing a dart to determine bonus elements - today, user engagement, perception, and satisfaction are key to any game or developer’s success. The competition is fierce and only the strong will survive with more than a smattering of games lost in the thousands of titles available via aggregators and multi-software platforms.

We’ll go out on a limb a bit here and predict that players will never see a single cookie-cutter title come out of the studios. Each game will have unique features and take users on a roller coaster ride from start to finish.

Accessing media interviews with the founders and examining the first releases sets the stage for things to come. While the ‘social side’ of gaming has slowly crept into the real money play side of online casino gambling, this firm does not seem to be taking the path of fluffy symbols, ridiculous ‘win celebrations’ for inconsequential spin results, or slots that are designed to ‘play all day’ on a small bankroll with no hope of ever getting a big win.

The company’s tack is quite the opposite. High-risk games with huge potential payouts seem to be the norm. Let’s take a look at Volatile Slot, their first release. The name says it all, doesn’t it?

This is a “hardcore slot for the serious gambler’, indeed.

With only 10 paylines on a 5x3 reel-set, the excitement built into this game comes from two play modes, a free spins bonus, and a potential payout of 25,600x stake.

The main feature of the game is the wild symbols that appear on reels 2, 3, and 4. Each one is assigned a random multiplier of 2x, 3x, or 4x. When more than one wild is present it multiplies the result again for up to a 64x total multiplier when 4x, 4x, and 4x appear anywhere on the reels, regardless of whether they are on a win line or not.

Landing any three wilds on a spin will trigger a free spins game as well. The minimum number of free games awarded is 10. Although the feature is not advertised or found in the rules, whenever a final result of less than 20x total bet is achieved during the feature, a special screen will pop up and say, “That’s not good enough! Lets try again” and the feature will automatically retrigger.

This shows some of the hidden genius behind the games. While the volatility index is extremely high, there is a failsafe built in so that players do not feel ripped off after finally triggering the feature only to learn that volatility does not stop simply because a feature is triggered. With this ‘secret mechanic’ players always have a chance to win big, and when they don’t they at least feel as if they were taken care of by the game.

The theoretical return to player percentage (RTP) is 96.10% for this game, but with such a high volatility index players would likely need to perform well over a million spins to come within the standard deviation of that number - hence the name.

What to look for in Volatile Slot: Expect plenty of low-paying spins between good hits. Wilds and Exploding Wilds add excitement and potentially huge payouts. Additional wilds are added during the free spins bonus round.

Golden Rock Studios is positioned to become a true industry leader. Their first release over Microgaming’s Quickfire platform was met with rousing enthusiasm by players. All new companies have lofty goals but we don’t doubt this firm’s ability to reach the milestones on its roadmap for the future.

We’ll keep an eye on future releases and review them here, as well as watch out for player feedback on the forums. You can also follow our news coverage of industry happenings and player-related information.