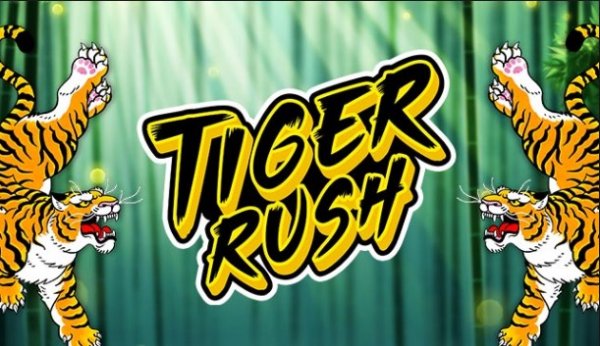 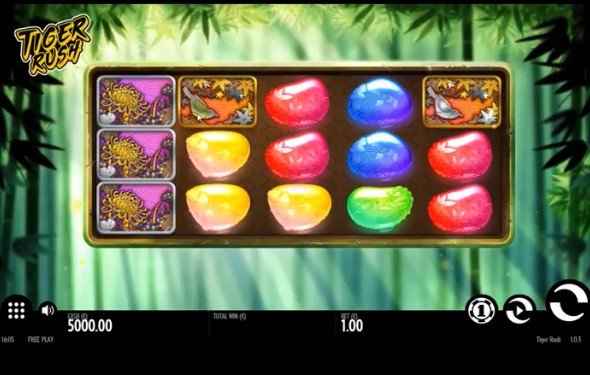 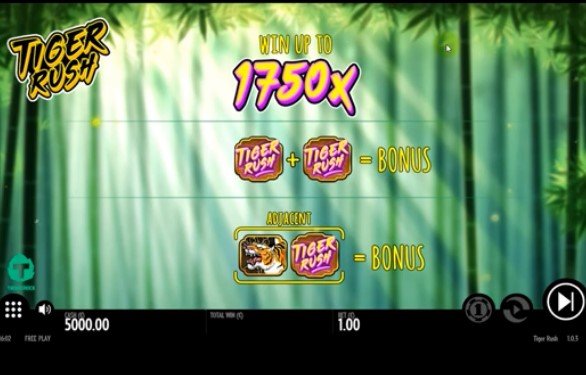 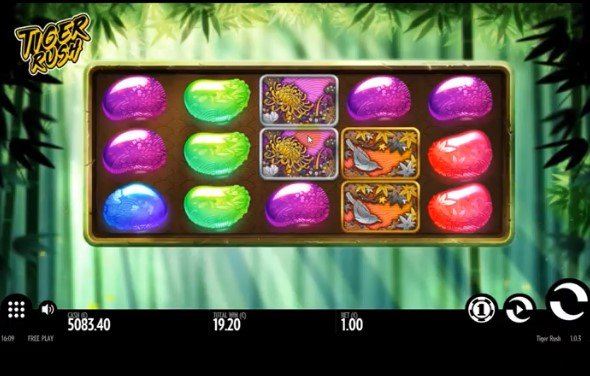 Jungle is a dangerous environment. With various creatures lurking from behind the bushes and trees, insects, spiders and other crawlers are a constant threat. However, you will forget all about them in case you spot a tiger, roaming the terrain, looking for food! Inspired by these beautiful and scary beasts, Thunderkick created a video slot called Tiger Rush.

This game is set in the depths of a jungle where tigers are at the top of the food chain. The background is full of thick greenery with sunrays penetrating through the bamboos, illuminating your way towards victory!

All of the symbols are located in a rectangle, which marks the reels. These however, are not clearly emphasized but the symbols are well-aligned. The basic and the lowest-paying symbols are jelly beans which glow in bright colors. Those that bring more money are finished in the Asian type of art but only two of them are used.

The graphics could be improved, but the players will not consider it a disadvantage. The sounds are decent as well and those premium symbols really look cool!

It is easy to start the game without coming up with some sort of tactics. Before you enter the jungle, make sure you set your bet. Prior to that though, you should know that this is a 3x5 release with 10 pay-lines in the main game. However, when the bonus round is triggered, two more rows are added to reels 2, 3 and 4, increasing the number of pay-lines to 25!

Adjusting your bet shouldn’t be a problem. All you have to do is click “Bet” or the poker chip icon and choose a number between 0.10 and 100.00. After that you are ready to go! Another important button except the spin is “Autoplay” where you can set the number of auto spins.

Three notable features in this game are included and they are listed below:

The wild symbol is a tiger and it occurs only on reels 2, 3 and 4. Its role is to replace any other symbol, but the scatter. Once it lands, it will cover the entire reel, but there is more…Every time, the tiger grants 1 extra free spin!

In the meantime, the scatter is a “Tiger Rush” logo and it can only appear on reels 1 and 5. It will help you unlock the bonus game.

Speaking of which, the bonus game is activated when 2 scatters, or 1 scatter and one adjacent wild show up together. The amount of free spins awarded depends on the number of combination that triggered the bonus game in the first place.

Here is where it gets interesting!

The middle reels expand from 3 to 5 symbols and the number of paylines is increased to 25! Suddenly, your chances of winning big grow immensely. Will you use this opportunity?

Our Take on Tiger Rush

Tiger Rush is a solid software product that focuses on expanding wilds and free spins. Despite it is not visually repelling, this game will not stun you, at least when it comes to the design. The blazing wild is a nice touch to the game, but will it be enough to increase your heartbeat?


You can play Tiger Rush at the following casinos