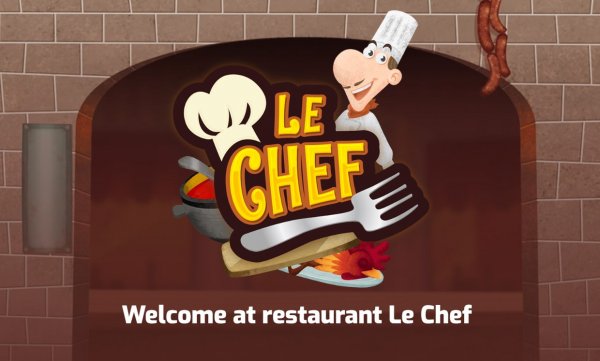 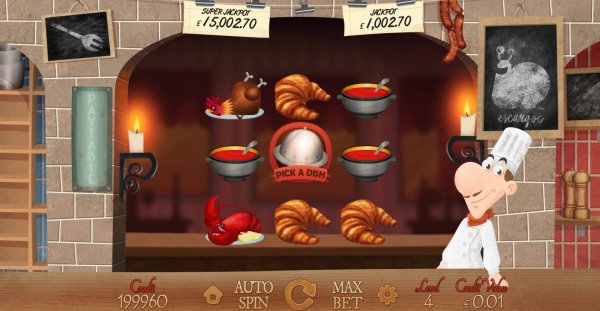 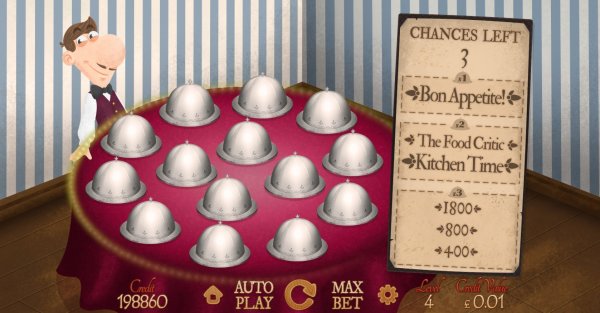 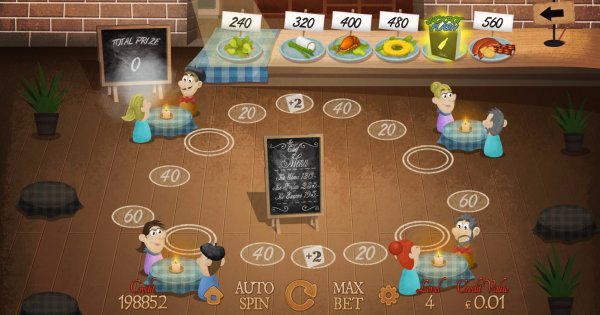 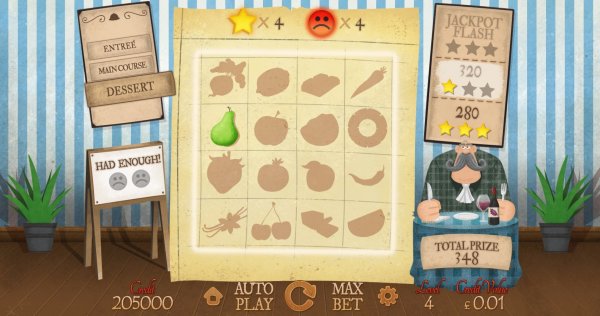 Le Chef from Magnet Gaming is one of the more intriguing, and polarizing Progressive jackpot slots to hit the market in a while. At first glance, you may think this is a cheap slot with little to no value. However, upon playing Le Chef, you will be pleasantly surprised at just how much value and fun has been packed in.

Le Chef places you in the kitchen of a French restaurant. The chef, also the star of the game will help you spin the reels, and collect those big wins. Along the way, you will find several interactive bonus rounds that put you in charge of what you win.

Le Chef has 3 reels and 3 rows of symbols with 8 paylines. Each spin can be played up to 20 levels of coins. Credit values are always 0.01, so the more levels you go up, the higher your bet. Minimum bets are just 0.10, while the maximum is still a low 8.00.

After any winning spin, a re-spin is awarded as well.

Being a restaurant theme, you can expect most of the symbols to be food related. There are several other symbols in the game that will unlock their respective bonus feature, so be sure to keep an eye out for those.

Pick a Dish is one of four bonuses. Get 3 pick a dish symbols in a row to activate this interactive round. Your goal is to choose a covered dish and reveal prize. Once revealed, you can either take the prize or try again. Prizes vary from coin amounts, to being able to unlock the other bonuses.

Bon Appetit is another interactive round where you get to a die and hope to serve up some expensive dishes to your customers. Once the die is rolled, you choose which space to land on. Empty spaces award coin prizes of 20, 40 or 60. Customer spaces will serve a dish from the top of the screen and award its corresponding prize.

Each dish you serve, gets more expensive, which means you win more with each dish served. You can also win a jackpot spin in hopes of winning one of the two progressive jackpots. The game ends once all rolls have been used and you collect all of your winnings.

Just like a real restaurant likes to impress, Le Chef tries to impress their own critics. Once activated by hitting 3 food critic symbols in a row, you will see a new screen with the food critic on the right. There are at least 3 courses with various foods to choose. You must pick a food to serve the critic, and reveal one of 4 rewards.

Either a small coin prize will be awarded. A frown face, a star, or jackpot symbol. If a frown face is revealed, this means the critic did not like the food and you need to pick again. Each course allows only a certain amount of frowns before ending that round.

If you find a star, then you have impressed the critic and you move one star closer to winning the larger prizes. Collect 3 stars to win 280 coins. Six stars awards 320 coins. And 9 coins will give you a spin on the jackpot.

Sometimes you can find a cheese symbol that will give you one more round to try and collect prizes and stars. Once all rounds are complete, you move back to base game play.

Kitchen Time is a free spin type round where your goal is to collect plates. Some symbols will have a white plate on them, and award a coin prize. All plates will go to the dirty dish pile and stack up on the left side of the screen once washed. The more dishes collected, the larger your end prize will be. You can win the jackpot if you collect enough.

You can play Le Chef Progressive Slot at the following casinos