CEGO ApS is a homegrown Danish game producer based in Aalborg. About 90 team members create unique and engaging games in-house. The company was launched in 2000 and was one of the first concerns to be awarded the highly coveted Danish gambling license in 2012 when the country liberalized gambling laws.

While they have always made social games, they also develop real money gambling games that can be found online. The firm's games power such casinos as Spilnu.dk and CasinoDanmark.dk.

Danske Spil, the country's state-controlled gaming operator took a 60% stake in the company in the summer of 2014 with the operators retaining the management of operations. By the summer of 2019, the Danish Gambling Authority had approved a deal that saw Danske Spil divest its shares in the company back to the founders along with an equity company.

Along with their subsidiary, Magnet Gaming, which seems to have been dissolved back into the parent company, CEGO has produced over 100 games since launch. While not all of the games translate into real money play, many do. The studio's social gaming library can be found at komogvind.dk in Denmark and beyond the Nordic region. Many of the elements of the games are common to social and gambling with a focus on entertaining bonus rounds.

Spilnu.dk came online with the 2012 license. CEGO games originally released under the Magnet brand can still be found there.

Under the Magnet label, the firm inked a deal with Microgaming Quickfire in February 2016, giving players in many European and other markets access to the games.

In late 2016, while still controlled by the state entity, CEGO signed a distribution deal with EveryMatrix in order to broaden its footprint globally. Independent online real money gaming sites that carry the company's titles can be found on this page.

In the past, we observed the games in esteemed libraries such as those found at Videoslots.com and Chanz social casino (real money play) and as of review time the promoters seem to be preparing for another shift in market focus, so check back for a gaming site that accepts players from your locale soon to see if they have reached out to players in your area yet.

With two decades of experience in entertaining players, CEGO uses the latest technology to keep up with the leading edge of gaming. Always a mobile-friendly developer, the games are deployed in HTML5 so they can be enjoyed on any device, anywhere. All it takes to load and play one of their titles is a connection to the internet and a device running a web browser.

All of the company's games are simple and straight-forward. The mechanics are rudimentary and the graphics are designed for fun, rather than to emulate reality or fantastic game worlds.

One of the games currently garnering attention from players is Troldmandens Værksted (Wizard's Workshop). It's a 3x3  game with symbols of fruits, owls, crystals, wizard hats, and magical books on the reels. Players must collect symbols to form occult combinations. The game holds three jackpots and offers a spinning wheel that has the potential to put wild symbols on the reels.

Looking further back in time we find less than an original title in Deep Blue. Many developers have used those words to title a slot game and it immediately conjures images of creatures and a world far below the surface of the sea.

Developed primarily for mobile, but just as suited to tablet or desktop play, we see another 3x3 configuration. And, again, we find a simple rendering of characters with smiling faces and childlike demeanors. The theoretical return to player percentage is respectable with an RTP of 96.5% and the volatility is medium. Those two qualities mean that players should be able to experience sustained playtime with plenty of small to medium wins and, if lucky, a large win now and then.

The big wins can also come in the form of a progressive jackpot as this game has two of them.

All it takes to haul up wild symbols is to make matches, each one will create a wild symbol on all three reels. Every win involving a wild symbol is then awarded its own multiplier.

It can be difficult to differentiate some of their social games from the real money action without having a chance to bet for cash. However, at least a dozen slots are on the market with some reports reaching as high as two dozen. It's not likely that titles such as Yatsy or Ludo are available for true gambling, but Siesta Solitaire might be.

The Vikings: Wheels of Valhalla is certainly a game that can be played for real money.

The game presents with 3 reel positions on each of the five reels and eleven paylines. Since it pays 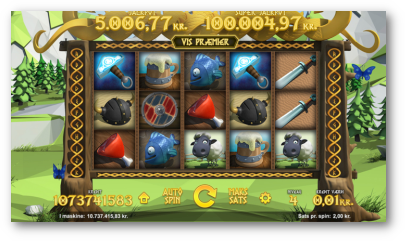 from both directions the total number of payline trajectories is, oddly enough, twenty-two.

The bonus features are...

So, again, we see them take the engagement qualities of social gaming and apply them to real money games. The games play simply, yet take players on a journey or voyage with plenty of feature triggers. You probably won't 'get rich' playing any of their games unless you hit a progressive jackpot, but most sessions end in a loss anywhere you play, so the chance to win prizes while being amused is certainly a valuable quality for some players.

The games are unique and quite a bit different from most online real money slot games and that is part of their charm. While the arts are simplistic and cartoonish, they don't come off as amateurish by any means. It is a style of art that is actually preferred by many online players. The pure fun of playing the games adds to the quality of "gaming" even though you are actually gambling real currency.

We're not clear as to why the titles are not more fully circulated as the delivery conveyances of Quickfire and EveryMatrix should give them exposure. Perhaps they are niche games most enjoyed in certain regions.

We suggest you keep an eye on this page to find new gaming sites that accept players from your region. You can also follow the press as World Casino News has done a fair amount of coverage related to the company.

Without the luxury of spending three or more sessions playing the slots for real money, we can't really say whether the titles are anything we would deliberately seek out. However, having become familiar with a few of the games we will certainly give them a flutter when we find then in a gambling environment.