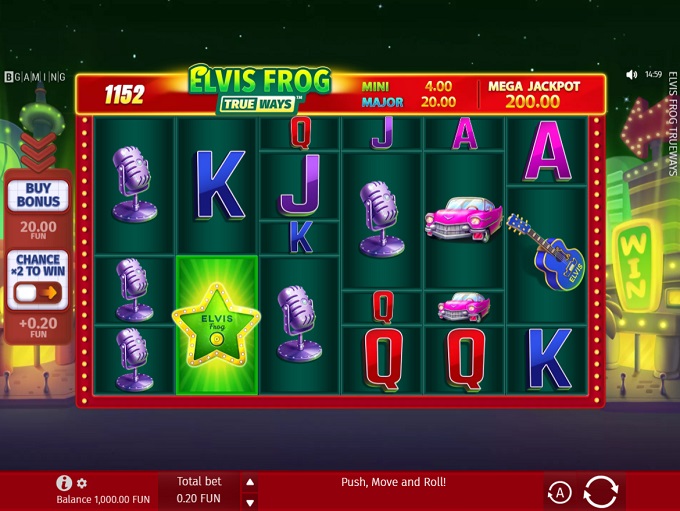 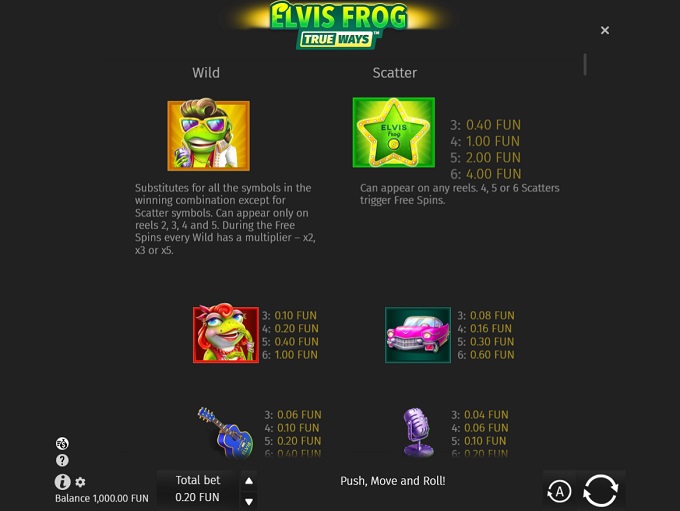 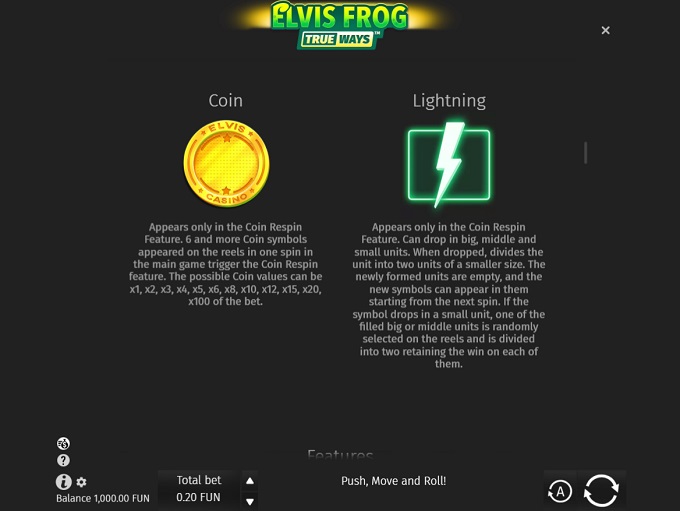 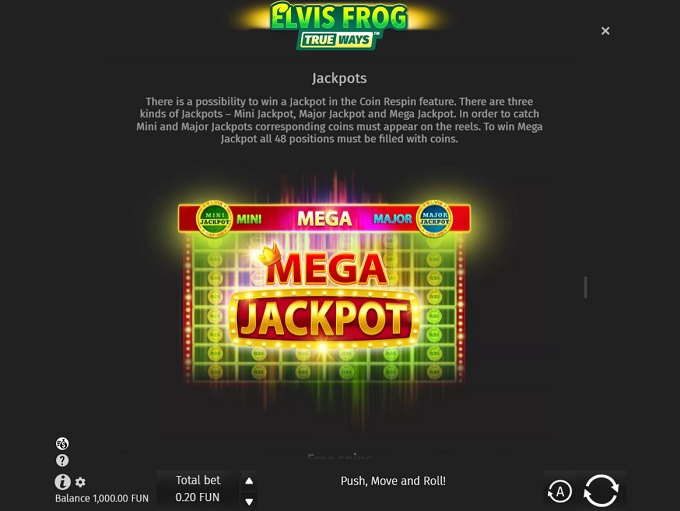 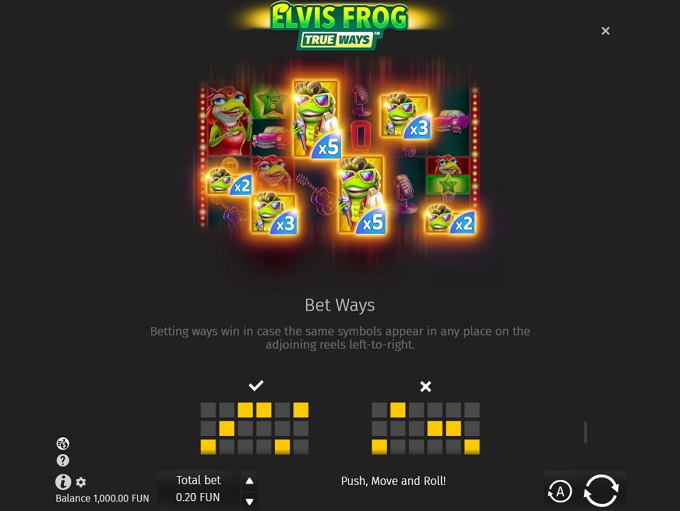 BGaming software provider released a new edition of Elvis Frog video slot in October 2022 - this time with modern TrueWays mechanics. Elvis Frog TrueWays video slot takes us to Vegas with the great singer, so spin the reels to feel a bit of fame!

The game plays on six reels with different number of symbols and up to 262.144 ways to win. Besides Wild and Scatter symbols with their usual powers, there are win multipliers during the free rounds and attractive cash prizes, even progressive jackpots.

Guitar and microphone come with the medium payouts, while royal icons (A, K, Q, J) pay the least.

Elvis Frog TrueWays video slot features an interesting layout with six reels and 2 to 8 symbols per reel. With the highest number of symbols on the screen, there are 262.144 ways to win. Three an dmore symbols of a kind create winning combinations landing from left to right on an active betway.

Before the game, players set the total bet in the range from 0.10 to 50.00 which has a dyrect impact on all payouts in the dynamic paytable. Enjoying this game, players have a chance to win up to 5000x the current bet.

Wild - Elvis Frog lands on reels 2, 3, 4, and 5 and as the Wild symbol has power to create longer winning combinations by substituting for all other icons, except Scatters.

Free Spins - Four, five, and six Elvis Frog gold stars landing anywhere on the reels, independently of the betways, trigger 12, 15, and 20 Free Spins. If three or more Scatters appear during the feature, additional 5, 12, 15, or 20 free rounds are awarded. Scatter gold star is also the highest paying icon in the game, giving up to 100.00, 250.00, 500.00, and 1000.00 for three and more matching symbols on the screen. During the feature, Wild symbols bring x2, x3, or x5 multiplier. On every spin, multipliers on the screen are added and the total multiplier is applied to all winning combinations.

Coin Respin Feature - Six or more gold coins landing in the main game trigger this feature where only coins and lightning symbols can appear. Coin icons bring cash values: 1x, 2x, 3x, 4x, 5x, 6x, 8x, 10x, 12x, 15x, 20x, 100x the bet. The feature starts with three respins and coins that triggered it will stay in their positions. Every time the coin or lightning symbols land, the number of respins is increased to 3. Lightning symbols can drop in big, middle, and small units. Lightnings divide the unit into two smaller empty positions where new symbols can land from the next spin.

Jackpots - During the Coin Respin Feature players can win three types of progressive Jackpots - Mini, Major, and Mega. To grab Mini or Major jackpot players need corresponding coins, while Mega jackpot comes when all 48 positions on the screen are filled with gold coins.

Buy Bonus - Any time players can pay the shown price and buy Free Spins or the Coin Respins Feature.

Chance x2 - Players can also activates this feature that increases the bet and players’ chances to win Free Spins or the Coin Respins Feature.

Elvis Frog TrueWays is an attractive and dynamicvideo slot with interesting and useful features. Besides Wilds with their common role, there are paying Scatters that can trigger free rounds where Wild icons bring multipliers. Also, during the Coin Respins Feature players can grab fantastic cash prizes. This is one more mobile-friendly game on the slot market.


You can play Elvis Frog TrueWays at the following casinos