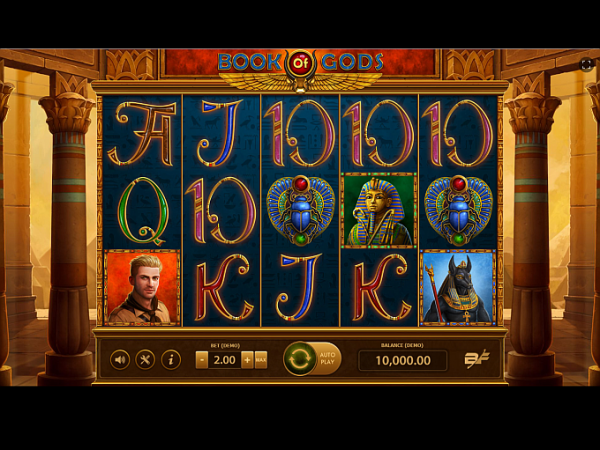 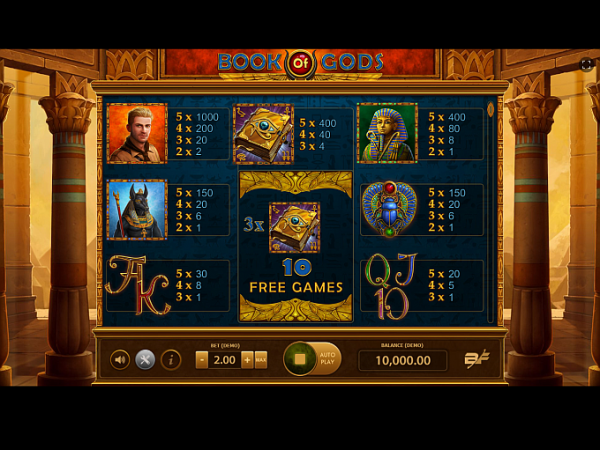 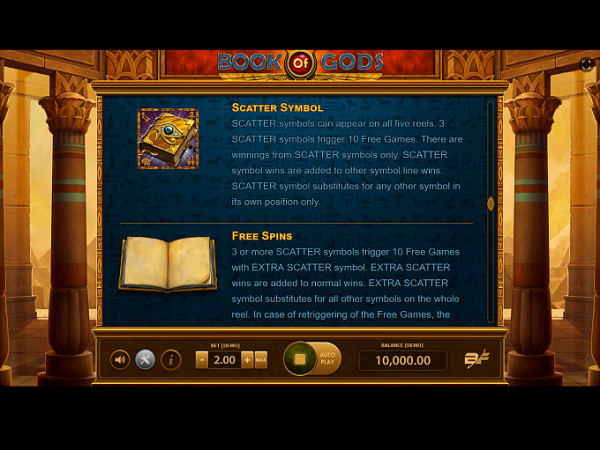 Are you ready to be taken on an unforgettable journey through time?

If so, the secrets and treasures of Egypt are waiting for you in this 5-reeled game machine coming from the BF Games slot list!

Featuring an ever-popular Ancient-Egyptian theme, Book of Gods comes with sine popular features as well such as Wilds, Scatters, retriggerable Free Spins, the Extra Scatter symbol and the Gamble option!

Let's see if this title stands out from most other games of this kind!

Is The Theme Interesting?

Be one of the lucky ones to descend into the tomb of Pharaoh and explore the hidden treasures!

The game boasts an Ancient Egypt theme featuring an explorer determined to take punters on a journey straight into the world's most popular man made structures!

Joining him on the blue reels are colourful playing card symbols from A to 10, golden masks of Tutankhamun, sacred scarabs and statues of Anubis.

The overall visuals are really detailed with the reels standing in the entrance of the ancient temple with a desert and other pyramids standing behind!

Gold, red and blue colours dominate the grid, and there is also authentic music contributing to the overall impression.

And What About The Betting Options?

This Pharaoh-themed game from BF Games is played across 5 reels, 3 rows and 10 pay lines.

The cost of the spin starts at 0.10 and reaches up to 200 credits which makes this title perfect for both low and high rollers.

The machine's RTP is 96.12%, so it pays off enough to keep you around, while its high variance means that the wins don't pay out very often, but when they do, they tend to be much bigger.

With that said, the maximum payout you could receive is amazing 1,000,000 coins!

When it comes to symbols, in order to form a winning combination, you will need to have at least two higher-paying symbols or three lower-paying ones!

The main character is the best-paying one, followed by the pharaoh and the Anubis, while, expectedly, the playing card icons reward you the least!

The book of spells is the only special symbol, acting both as Wild and Scatter, while also paying up to 20x the line stake for five-of-a-kind combinations.

The title doesn't boast some unordinary features, but you can enjoy a set of 10 free spins with a chance to retrigger more within the round!

Land three or more books at the same time and the Free Spins feature is triggered!

Besides, it gives you a special expanding symbol that will be determined at the beginning of the feature and will spread throughout the reel to help punters form a winning combo.

Another great part is – this bonus round may be retriggered should more books land during the extra spins!

Lastly, this beautiful title comes with a Gamble feature, making it even more appealing and adventurous for the punters, as they can choose and pick between red and black card to double each of their winnings, but with a risk of losing them!

What Can We Conclude?

If you are fond of the slot machines featuring the Book mechanic, Book of Gods will surely appeal to you as it boasts everything you expect – a popular Egyptian theme, nicely-done graphics and the Book symbol boasting a dual function!

Though there are not many special features, the game boasts high volatility and amazing winning potential through amazing themed symbols that will take you back through time.


You can play Book Of Gods at the following casinos