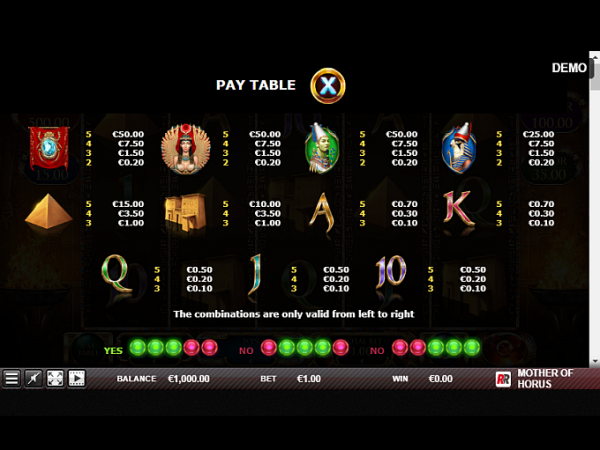 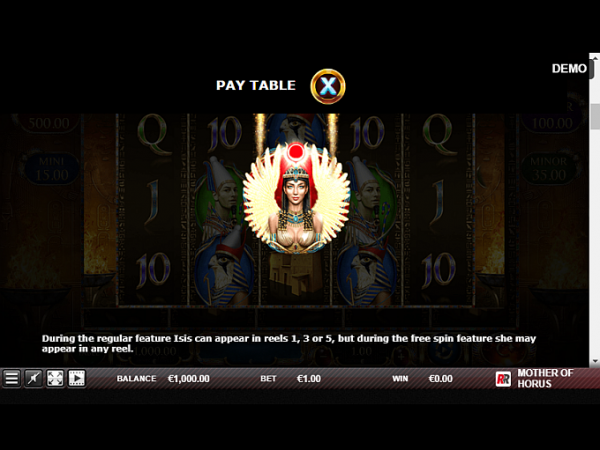 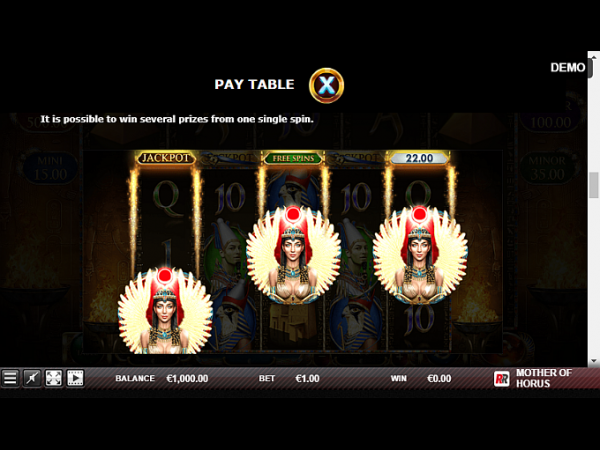 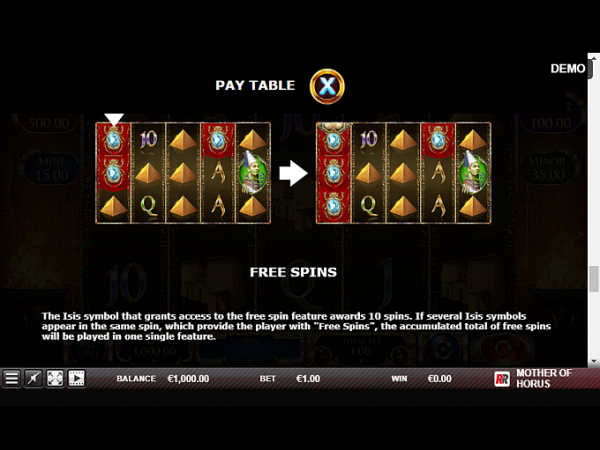 It’s time to once again enter the world of myth and legend. Egyptian-themed offerings are a staple of slot developers – an aesthetic they keep coming back to.

A theme that’s perennial and always welcome. Tombs, mummies, gods, all the good stuff. And of course, the promise of great riches that comes with anything ancient.

Now Red Rake Gaming has had a turn on the Egypt train and they brought us Mother of Horus. A game with extra spins, jackpots, and a reel prize feature.

Once you start the game the first thing you’ll notice is the sound of the wind. There’s no other music but this, and it works beautifully to create an atmosphere of mysticism and slight dread. All the other sounds are fitting too.

Sound design is often no given the importance it deserves, but in this game, it’s front and center.

When it comes to the graphics…

…they are high-quality and match the tone of the theme. Set deep inside a temple, there is a wall full of hieroglyphs and two braziers with roaring fires.

…are plucked from Egyptian mythology and there are pyramids as well as the gods themselves – Isis, Osiris, and Horus. This divine family trio is joined by a glowing scarab as the wild and low paying symbols in the form of card numbers.

This particular expedition into the depths of pyramids happens on a 5x3 grid with 50 fixed paylines. Winning combinations are counted left to right.

When it comes to the setup there aren’t many surprises. It’s a very standard form for a video slot to take.

Punters can choose to use autoplay which will allow them to spin the reels automatically and sit back and relax.

In order to take a spin…

…it’s necessary to stake a minimum of 50 cents while the maximum bet is €35.

This is where the title really shines, as it contains both base game and special features which are engaging and fun.

The first thing you’ll notice is the prize boxes at the top of the reels. Reels 1,3, and 5 have the unlocked in the base game but in extra spins all five are available.

Instant prizes await when the Isis symbol appears on a reel. The reward at the top is then received and it can be instant cash or access to the jackpot or extra spins features.

There are four jackpot tiers and their value depends on the currently selected bet. The jackpot wheel will spin in the bonus game mode and land on one of the four jackpots.

Extra spins are here too, awarded also by Isis via the Prize Bar. Ten spins are awarded and the remaining two prizes boxes are unlocked meaning it’s potentially easier to access the jackpot wheel.

Egyptian-themed games are quite common and very popular.

There’s just something about the time and the region that clearly appeals to both developers and punters.

This effort by Red Rake is one of the better titles out there. While it’s not shockingly innovative, the combination of features is very appealing and so is the graphical and sound design.

It’s a worthwhile game for all players who enjoy a bit of Egyptian flair in their gaming.


You can play Mother of Horus at the following casinos