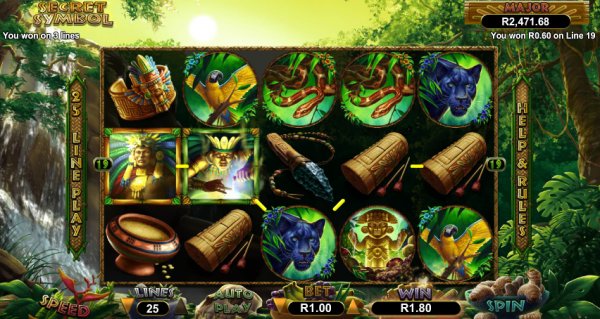 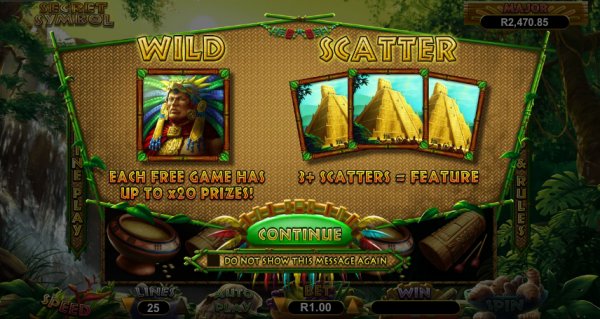 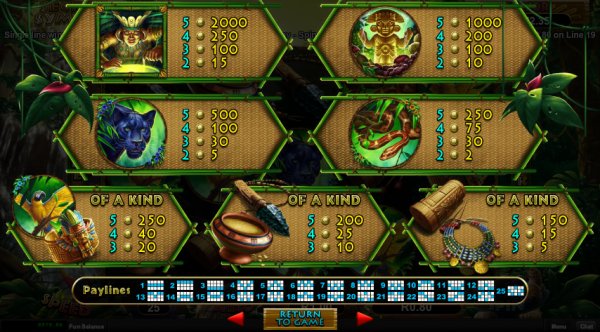 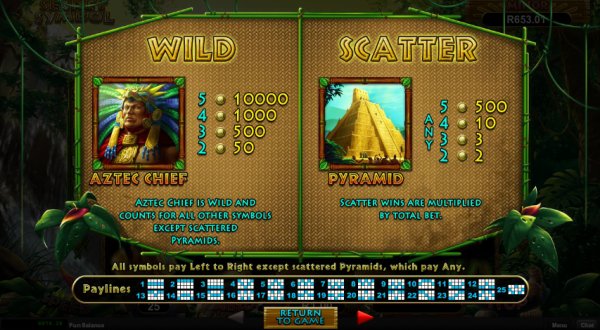 Secret Symbol is an online jackpot slot made by RealTime Gaming (RTG). This slot uses an ancient Aztec theme with symbols and sounds to match. The backdrop for Secret Symbol is set in a lush jungle with waterfalls, vines, and colorful scenery. Drums play in the distance with an eerie undertone that put you in the perfect place for playing Secret Symbol.

Players will find 25 adjustable pay lines on 5 reels that can be played all at once, or just one at a time. Coin values are adjustable from as low as 0.25 per coin, up to 125. Once coin is played per spin. Controls include the standard spin, and auto play buttons that allow for hands free spins. A speed button has been added to let you customize how fast or slow the reels spin. For the impatient slot player, a stop button will appear where the spin button was after the reels begin to spin. Pressing the stop control will instantly stop the reels.

Symbols are unique to the theme and very well made. No boring card symbols in Secret Symbol. Low paying symbols include a necklace, drum, ancient pot and a rudimentary knife. Parrot and gold bracelet round out the lower tier of symbols.

Snakes, panthers, a gold Aztec statue and an Aztec warrior make up the higher paying symbols. Two of a kind of this tier symbol will trigger a win.

Wild and scatter symbols also make an appearance in Secret Symbol. The wild is an Aztec Chief which pays 10,000 coins when you get 5 in a row. A pyramid acts as the scatter which also pays up to 500 coins, but also triggers the games bonus feature.

Secret Symbol feature is the lone bonus in the game. Three or more the scatter symbol mentioned above will trigger this feature Players will be given 10 free spins with additional bonuses for each spin. Aztec Chief symbols can cover an entire reel when landing on reels 2 or 4 to help make bigger wins.

A Secret Symbol Multiplier is also added to each free spin which will be shown at the top of the reels before each free spin. This can range from a x2 multiplier, up to x20.

You can play Secret Symbol at the following casinos