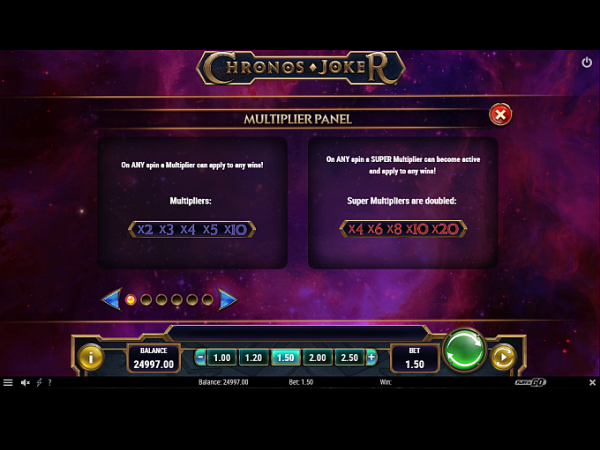 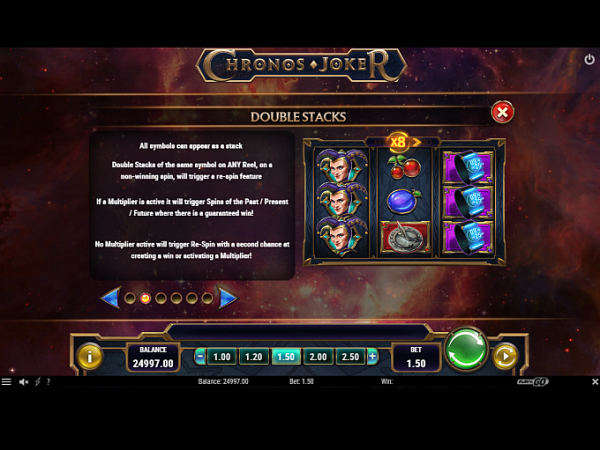 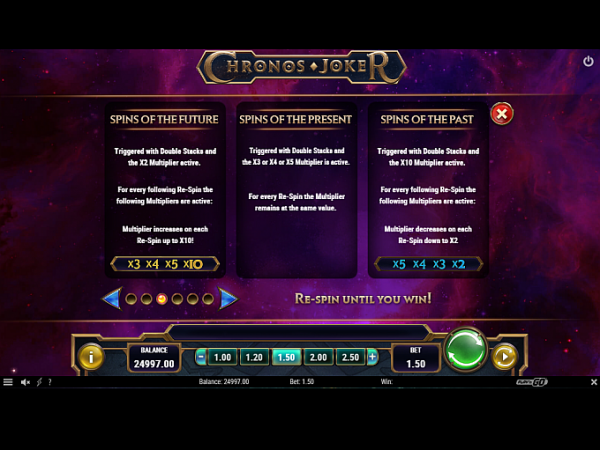 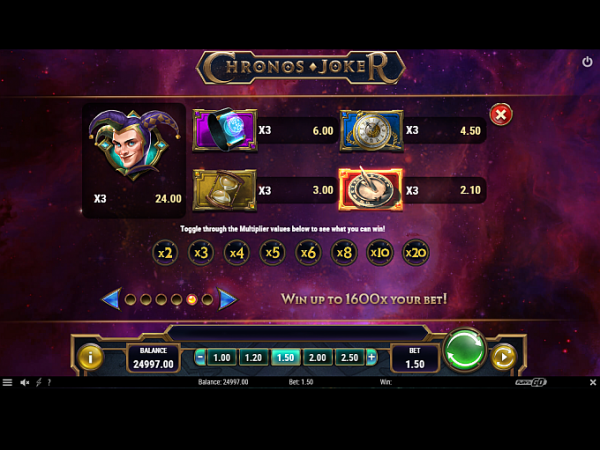 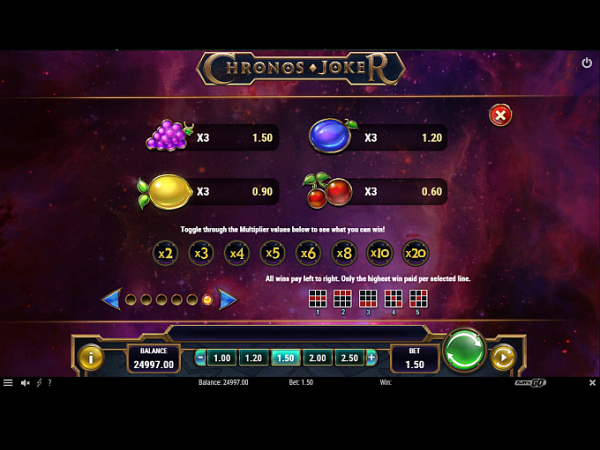 Time has always fascinated people, especially the notions of time travel and manipulation. So many different stories made into TV shows, movies, and other media deal with ideas of experiencing time in a different manner than just as a straight line.

Developer Play’n Go is joining in with Chronos Joker, a game about a Joker who has strange magical powers relating to the flow of time.

Appearing as a 3x3 slot with 5 paylines this offering may look classic but looks are deceiving.

It is in fact…

…a totally INNOVATIVE take on the mechanics of respins and multipliers!

The atmosphere is meant to be magical and mystical. Like you stepped in a strange time portal and have become separated from the normal space and time continuum.

As the background image glows and pulsates, the reels spin with symbols both familiar and new.

Taking inspiration from classic slot games, there are cherries, lemons, grapes, and plums.

But there are also four different timekeeping devices – a sundial, an hourglass, a wristwatch, a gizmo from the future that looks like a fancy bracelet.

It’s quite good at creating a cool and unique vibe especially when the joker himself appears playing the role of the wild.

The grid is simple and small, but the range of possible bets is quite large. This time-traveling extravaganza needs you to stake at least 5 cents on a spin. But if you wish, the maximum bet is a whole $100. So you can be a time traveler and a high-roller in this offering.

All the other features we’ve come to expect from modern games are here. Quick spin will speed it all up and autoplay is autoplay. We all know what it does, it lets you choose the number of spins to happen automatically while you stare at the pretty background.

This is where it all really shines because the developer has packed this title full of interesting takes on gameplay mechanics.

Firstly, there is a random multiplier that can happen on any spin. It goes from 2x to x10 normally. However, from time to time super multipliers will appear that can upgrade your winnings by as much as x20!

All symbols can appear as stacks in this game, but it’s what happens if two stacks are present on the reels that’s truly out of this world.

Two stacks of the same symbol (called Double Stacks in the game) will trigger respins. There are three different types in all – the Past, Present, and Future Respins.

And the highest value activates Past Respins but in this case, the value moves downward as the spins progress.

The rules are the same…

…for Double Stacks that appear with a Super Multiplier only the values are higher.

And if Double Stacks appear on a spin that has no multiplier then there will still be one more respin to give a chance for one to appear.

An innovative take on slot classics, Chronos Joker shouldn’t be missed. It’s a fun time because of the mayhem that is caused by all the respins and multipliers.


You can play Chronos Joker at the following casinos