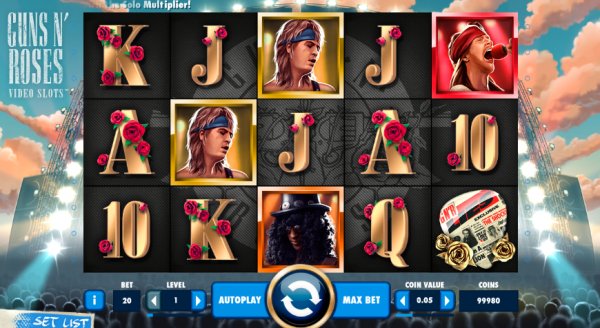 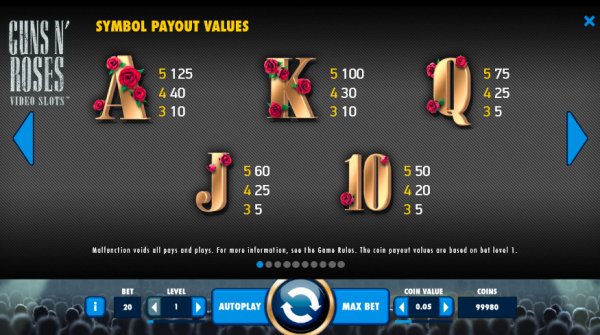 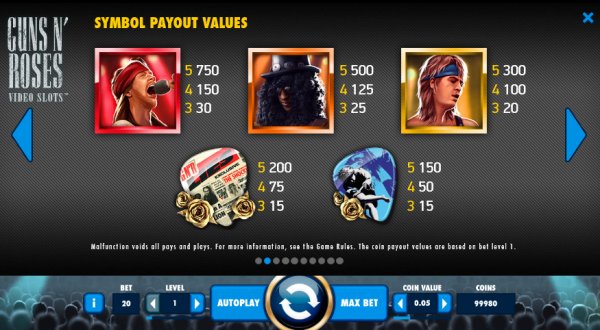 After 30 years, Guns N Roses gets their own slot game, and as an ardent fan of the band, I was really excited to give it a shot. As you may have guessed, the theme of the game revolves around the band, and puts you in the crowd as a spectator.

The artwork and overall theme of the Guns N Roses Slot is really impressive with artsy symbols and backgrounds that give it a great rock feel. The next thing I found really cool is I could even choose a Guns N Roses track to play. From November Rain, to my personal favorite – Sweet Child O’ Mine

The Guns N Roses slot is reflective of their history, and you can expect to see music videos, album covers and the band members featured in the main symbols and band logo.

NetEnt has truly justified one of the most popular bands of the 80’s and 90’s by positioning the interface right in front of a festival stage complete with puffs of white cloud in the bright blue sky, and upfront is a sold out arena with lights and a moshing crowd.

What’s more intriguing is NetEnt has also made this game available on mobile devices – Android, iOS and iPad platforms. One of the pioneers in the gaming industry, NetEnt has been providing thrilling slot games backed by cutting edge platforms ever since their inception in 1996, and the Guns N Roses game is no different.

The game play of Guns N Roses is something you can expect from a NetEnt slot game, meaning it is coin based, 5 reel, 3 row and 20 pay lines with features such as the Appetite for Destruction Wild, Expanding Wild, Encore Free Spins, a Solo Multiplier, bonus symbols and a Crowd Pleaser Bonus Game.

As a slot veteran, I found Guns N Roses rally easy to follow, but its long list of features might be overwhelming for new players. These features however do significantly increase your chances of winning when triggered correctly.

NetEnt has also maintained their return to player rate with Guns N Roses and clocks in at 96.93 percent.

The wild symbols appear all over the screen, while the scatter symbols pay great as players can easily get free spins when three or more of these symbols appear on the screen. These free spins increase your chances of winning some great payouts, making the game even more exciting.

The wilds are still pretty much the same in the Guns N Roses slot, except for they expand this time around. Meaning they replace other symbols to form a winning combination, but the added benefit is that they expand to populate the entire reel resulting in a higher combination than ever before.

Theme based symbols are based on music and of course, Guns N Roses. The attention to detail and creativity is superb. This is evident in the various symbols that have the cover art for some of the bestselling G-N-R albums of all time.

I was really impressed by the myriad of bonus features. Starting with the Wild and Expanding Wilds. Wilds are a random feature, and can appear anywhere on the reels and anytime, with the only exception being they can’t appear on reel 3 during the Appetite for Destruction Wild feature.

The wild symbols of NetEnt’s Guns N Roses slot substitute all symbols except for the bonus symbols in order to create winning pay lines. Further, a wild symbol can automatically transform into an expanding wild, which will expand vertically to cover the entire reel.

Legends Spins – this random feature of Guns N Roses is triggered automatically during gameplay so you don’t have to do anything. When triggered, it will activate 3 re-spins and 1-2 stacked wild reels.

The Stacked Wild is a wild symbol that will appear on reel 3 in the first spin, 1 and 5 are stacked wild reels in spin 2 and 2 and 5 in the third spin. I did notice the same artist symbol appear on other reels, but it wasn’t stacked and didn’t serve as a wild symbol.

Appetite for Destruction Wild – this wild is represented by a cross and can be triggered randomly during gameplay, and can be displayed fully or partially. It substitutes all symbols except for bonus symbols, meaning it cannot be triggered during the Legend Spins or when bonus symbols are on the reels. Furthermore, no other features can be combined when this cross shaped wild is active on the reel.

Solo Multiplier – another random feature of the Guns N Roses slot that when triggered, multiplies the winning combinations including the wilds that are present on the reels anywhere between 4 to 10 times.

Encore Free Spins – my Encore Free Spin activated an impressive 10 free spins, during which a band member appeared on the reels as a stacked wild to enhance winning combinations of each spin.

Crowd-Pleaser – this popular Pick & Click mechanic takes you through various levels, with each rewarding enormous coin wins respectively, and the higher the level, the better the reward. Crowd-Pleaser also offers a +1 pick symbol and free spin symbols, where 3 free symbols during the entire game will activate 10 extra free spins over and above the bonus game.

A Slot Game for All

This branded slot is definitely going to make fans of the band go wild, but is even exciting if you’re not a Guns N Roses fan given the high octane infused into the game. There are several bonuses to tap into, making the Guns N Roses slot even more exciting – perhaps one of the reasons it was my favorite slot of the evening.

You can play Guns N Roses at the following casinos