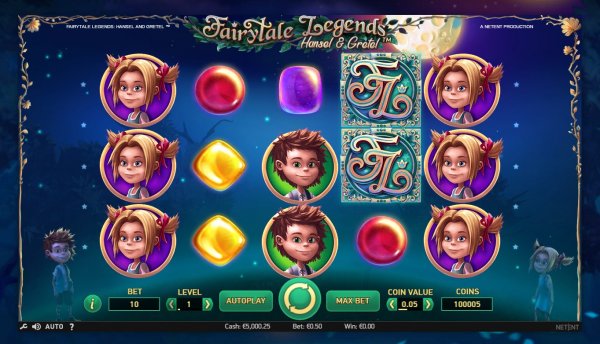 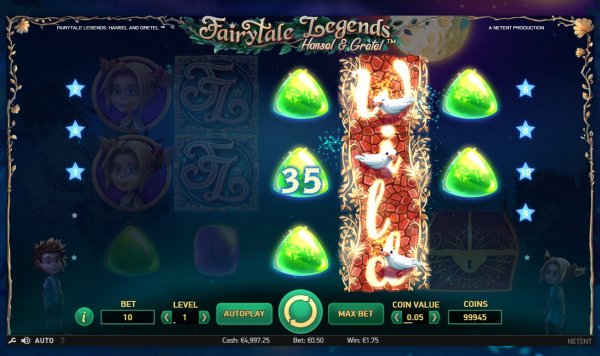 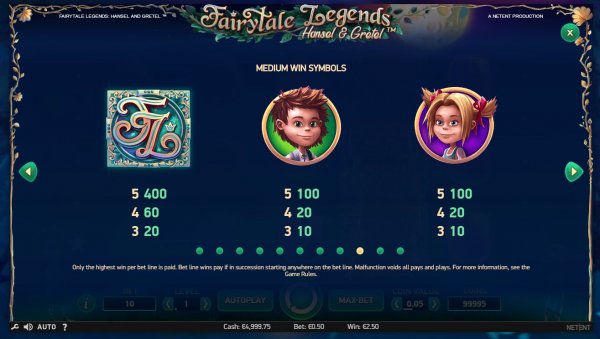 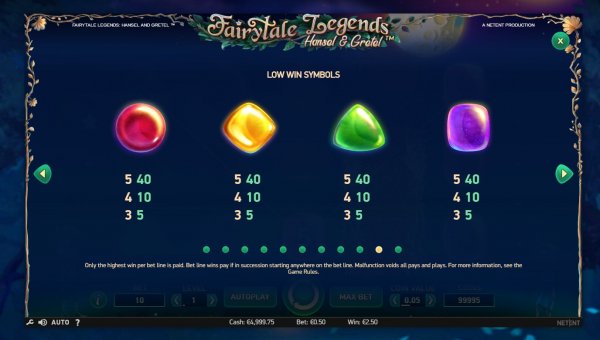 The slot is set in a mystical theme with both Hansel and Gretel walking through a forest s you spin the reels. Enchanting music plays in the background and gives you a sense that something magical is about to happen.

Hansel and Gretel uses 5 reels, 3 rows and 10 pay lines. As with most NetEnt slots, you can play up to 10 coins per lines. Coin values go from 0.01, up to 2.00. All controls are also just like other NetEnt slots; so if you’ve played one before you how easy they are to use.

Low paying symbols are the purple, green, yellow and red shapes. Each pay the same amount when you get 3 or more in a row. Medium win symbols are Hansel and Gretel whom each pay the same. Then there’s the Fairy Tale Legend logo which pays up to 400 coins.

Other symbols include a coin win symbol, free spin symbol, and a red trunk. A stacked wild symbol shows on reels 2 and 4 during normal game play and is the brick road. When a stacked wild covers an entire reel, it triggers a re-spin with more stacked wilds on reels 1 and 5.

Random features can be triggered throughout every spin. The first is called Fairy Wonder spin. A cluster of 5 to 9 logo symbols show on the reels during one spin. Fairy surprise is the next random feature. After any no win spin, this feature can be triggered as it turns a random symbol into a win, along with other low paying symbols to match it.

Fairy Wild spin is the final random feature. At the beginning of any spin, you could get stacked wilds on reels 1, 2, 4, and 5 for one spin. This will also trigger a re-spin.

There are also 3 bonus games that can be triggered when getting 3 of the red trunk symbols on reels 1, 3 and 5. Candy house bonus lets you pick 3 of 15 symbols that reveal multipliers. You can also win 10 free spins, or a coin win that is multiplied 15x your bet for the spin that triggered this bonus.

Fairytale Legends: Hansel and Gretel is a treat to play and can be played on both mobile and desktops.

Add your comment about Fairytale Legends Hansel and Gretel