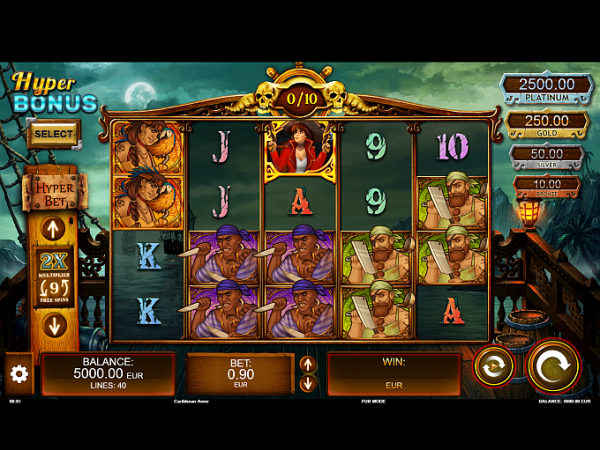 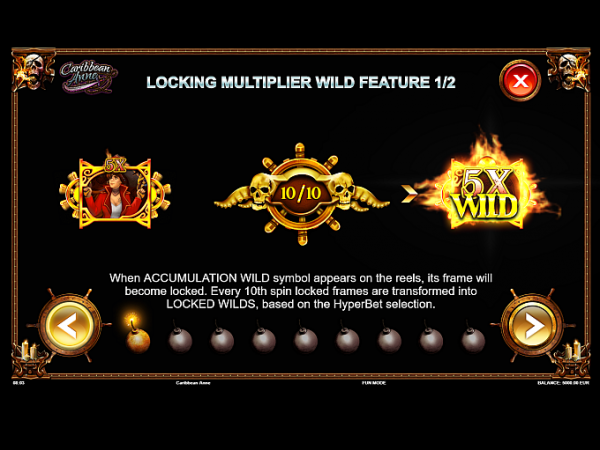 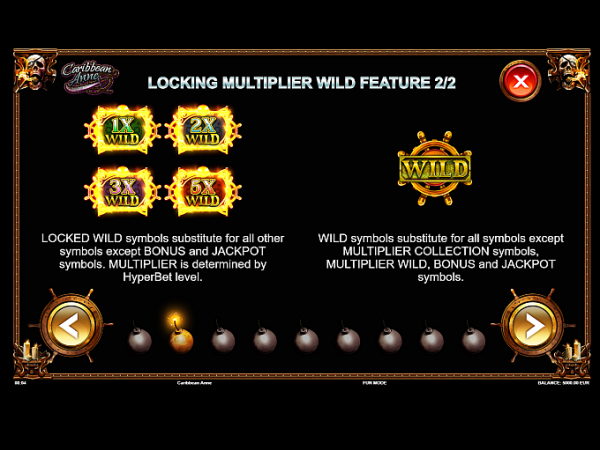 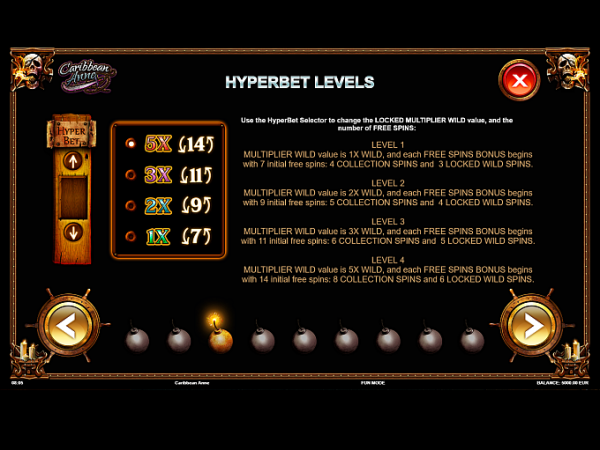 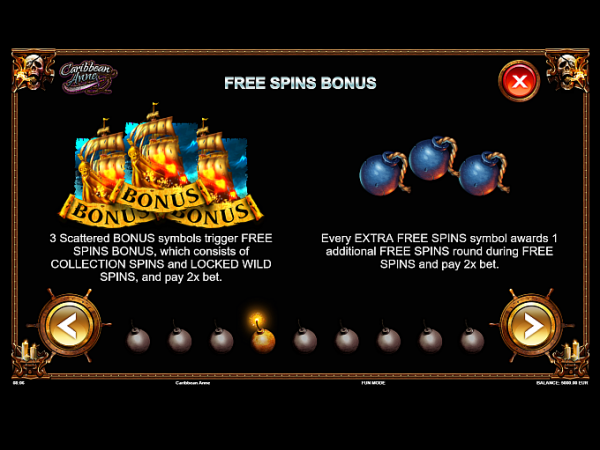 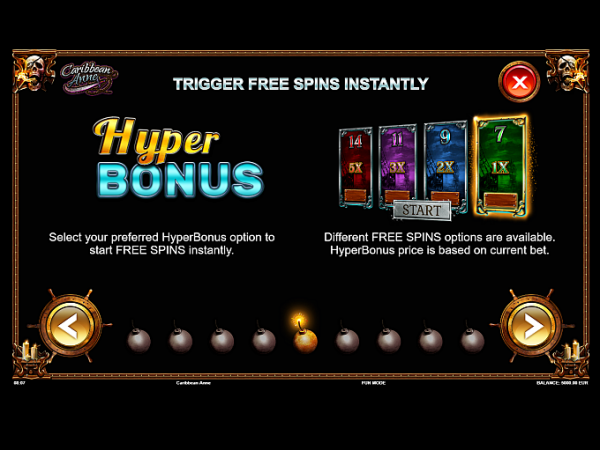 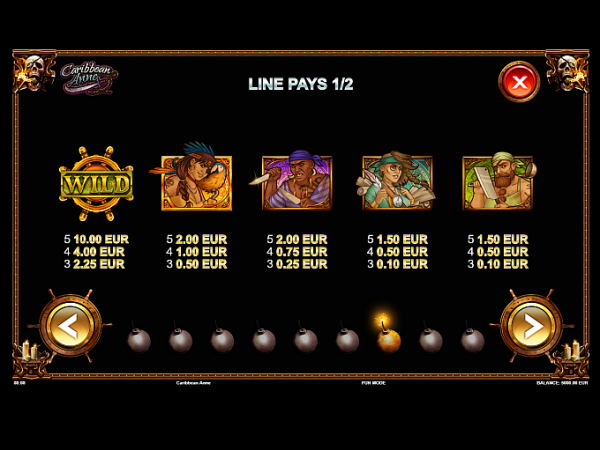 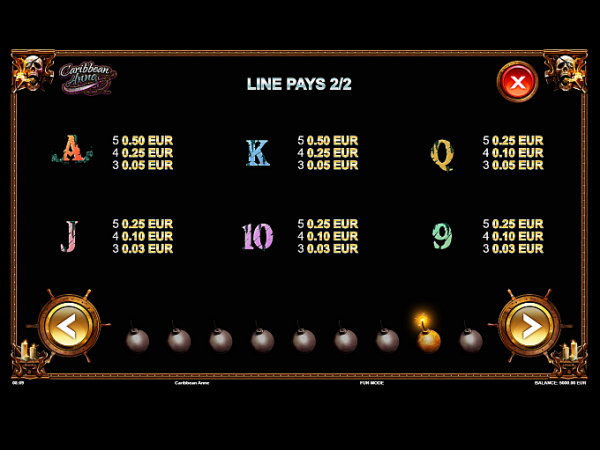 Pirates are the world’s most popular villains. Yes, they robbed and pillaged but they looked so cool doing it. And ever since a certain amusement park ride was turned into a film featuring Orlando Bloom and Johnny Depp Caribbean pirates specifically have been huge in fiction, books, games and other media.

The developer is capitalizing on this still ongoing trend with this swashbuckling title called Caribbean Anne which stars Anne who is more or less a gender-flipped Jack Sparrow.

But that doesn’t mean there isn’t originality on display. Kalamba Games has seen to that with some very interesting features, lovely graphics and the inclusion of their beloved HyperBet and HyperBonus functions.

It’s the Caribbean. Tropical islands, crystal-clear waters, palm trees, and white sands. And occasionally a frightening storm because it’s still the ocean and the ocean is a harsh mistress.

…from the background which is actually a pirate ship from whose bow we are looking out in the calm sea on a moonlit night to the symbols themselves which are furnished with ornamental helms, or represented by sails and bombs.

It’s all very fitting and very evocative and the developer should be commended for capturing the Caribbean pirate vibe very well.

…are illustration of Anne’s crew, while the wild is Anne herself sporting a couple of guns and a couple of frames of animation every time she lands on the reels.

The low paying symbols are the card numbers we all know and love.

This pirate ship is sailing across a 5x4 grid with 40 fixed bet ways. Punters can book a ride at a minimum rate of 50 cents per spin or, for those who are into it, the max bet is a massive heart-stopping 2700 euros.

It is fitting somehow that a pirate-themed game would cater to high-rollers, isn’t it?

Of course, we have to mention the famous Kalamba options. HyperBet is a system in which players apply a multiplier to their bet but also the wilds and to the number of extra spins they get when the feature activates. It goes from 1x to 5x (and that’s how it’s possible to get the ludicrous 2700 euro sum).

HyperBonus, on the other hand, lets players purchase extra spins directly at various price points determined by the current bet and by the number of spins and the multiplier being bought.

Pirates are not known for being minimalists, so this game isn’t either.

Firstly, there are the accumulation wilds which is a feature by which a special wild (the Anne symbol) makes a little lock on the position it appeared in. And every 10 spins these locked places are turned into wilds.

…it’s the extra spins. They are separated into two phases. Collection and Locked Wild spins. During the first phase, the same locks as in the base game are applied and the during Collection spins they stay wild until all the spins end.

Finally, there’s the jackpot. It’s bet level-dependent, it comes in four stages and it’s won by enough jackpot signs appearing on the reels.

Seven or more payout the bronze and 15 or more the platinum. The signs can appear in base game and extra spins.

Obviously, we’ve seen pirate-themed offerings before such as NetEnt’s Ghost Pirates so what sets this game apart?

Excellent graphics, cool vibes and a bunch of features. As well as that sweet, sweet jackpot that is always a welcome addition to any game.

A title not just for fans of pirates but for all punters looking for something interesting to play.


You can play Caribbean Anne at the following casinos