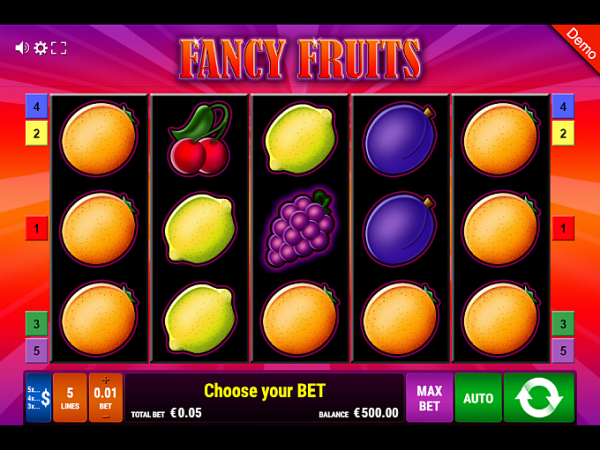 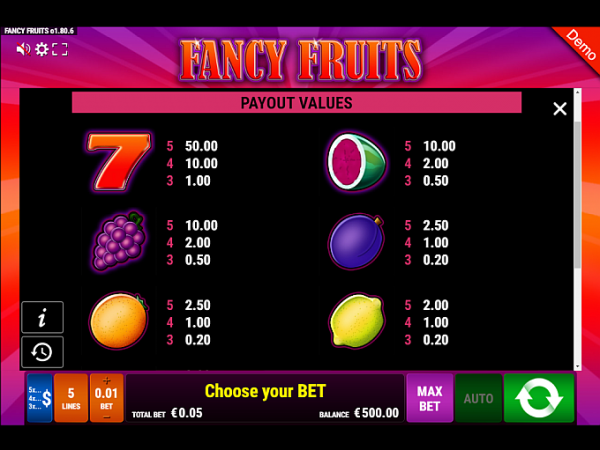 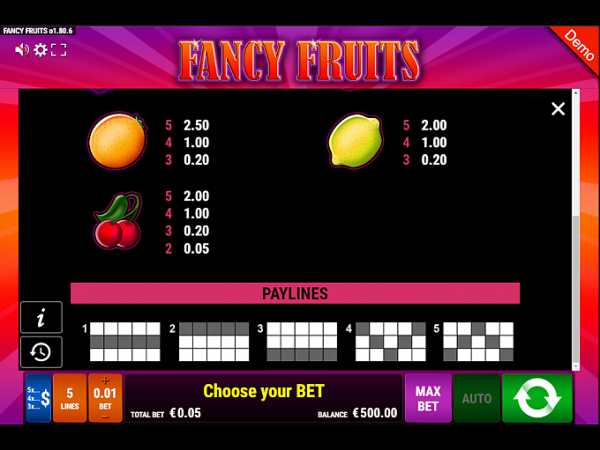 Ah, fruit. Who doesn’t like some fresh, juicy, tasty fruit? But what if the fruits were also fancy? How about them apples?

Well, this offering by developer Gamomat may not contain any apples but it contains a bunch of Fancy Fruits. And they mean business too because they bring with them the potential for some sweet and crunchy big wins.

Of course, this theme is as old as slots themselves and symbols based on cherries, lemons, etc. have brought joy to many a punter over the long and illustrious history of one-armed bandits.

The design employed by the software provider here is decidedly old-school. Eschewing the modern tradition of lots of animations and special effects the offering instead opts for simple but colorful background, a nice big title card at the top, and minimalist reels consisting of long black rectangles on which the symbols reside.

Just from describing it…

…you may be forgiven for thinking it all sounds a bit boring and uninspired. But actually, the game manages to create a very chill atmosphere that gets under your skin.

Adding to that effect is the minimalist soundtrack consisting only of the game’s title being spoken aloud by a sultry female voice upon start and the retro fruit machine klaxons while and only while the reels are spinning.

It’s a masterful way of showing that sometimes less really is more.

Here this title is very old-school as well, offering only the barebones. The grid is a 5x3 deal with only five fixed paylines. The bottom edge of the screen contains familiar buttons such as spin, autospin, max bet, the bet selector and the paytable viewer.

Speaking of bets, this is definitely not a high roller experience because the maximum you can stake tops off at only 3 euros while the minimum is a minuscule 5 cents.

Also of note are the win gambling options. There is a standard card color guessing game that functions on the double or nothing principle, as well as a ladder game. The player can choose to collect their winnings or continue gambling after every outcome.

Yes, there is a gamble feature but is that really special?

And yet, none of this really matters. We didn’t feel like the game was any less engaging for lacking the most bleeding-edge bells and whistles.

Instead, we find ourselves reconnecting with the simple but exciting charm of pressing “Spin” and seeing what happens.

The developer Gamomat really deserves kudos for managing to turn something that could have ended up boring and passé into something that’s actually quite satisfying.

Not that it’s their first time since they’re also behind another nostalgic fruit exercise called Back to the Fruits.

So, if you are looking for something really simple that harkens back to simpler days but is no less amusing for it, definitely give this title a chance.


You can play Fancy Fruits at the following casinos