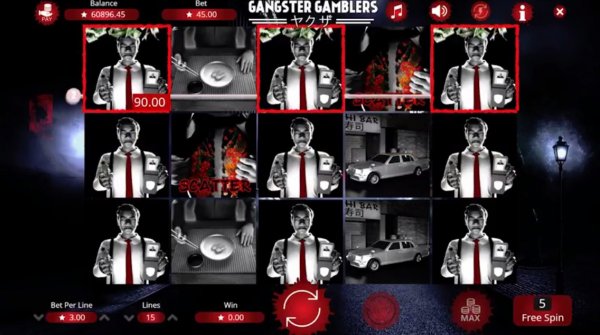 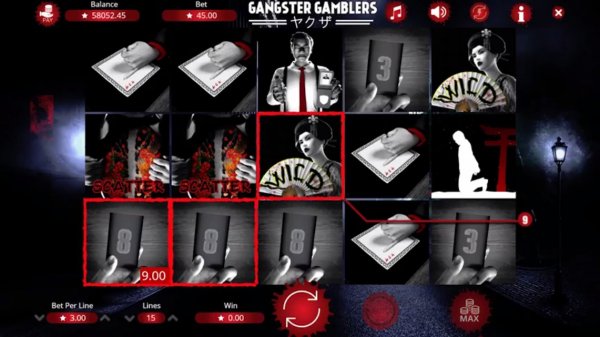 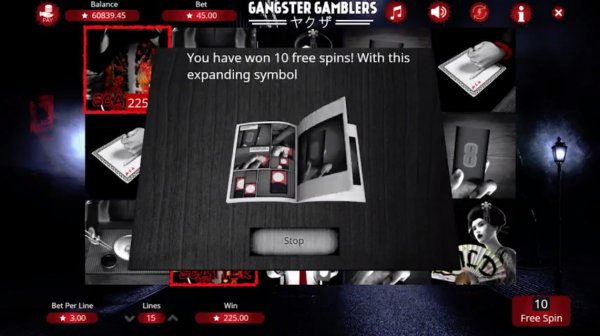 If you have ever seen the cut classic movie Sin City, you may remember the unique cinematography. With its black and white, yet colored scenery, with dark and crisp images, it was a throwback of sorts to classic cinema. But, with a twist of modern action thrown in.

Gangster Gamblers, the latest slot from Booming Games takes on this same concept. With a film noir theme, they take two genres and throw them together, to see what happens. In this case, the result is an instant classic.

The theme is that of the old Japanese mob, or Yakuza. Its set in the 50’s with a black and white scheme, with accents of color throughout. Even the music score is reminiscent of and old 50s gangster film.

The game itself is a standard 5 reel, 3 row video slot with 15 paylines. A maximum bet of $3 is allowed, with 1 coin played per line. An auto play, and max button make up the remaining controls.

Symbols include numbers, mobsters police, Geisha girls and other cinematic symbols. Every symbol has a cut scene when it creates a winning combination. For example, the man-eating sushi symbol will cut to a scene of the same man getting shot while eating the sushi. Brutal, but cool looking none the less.

The main features are expanding symbols, and free spins. When 3 or more of the scatter symbols appear, 10 free spins are awarded. A comic book is flipped through to reveal which symbol will be expanding during those free spins.

The symbol that was chosen will show as a large symbol during those free spins. This helps create big wins, and cool cut scenes.

You can expect more Asian themed slots from Booming Games soon. This is their first in a series of Asian slots that are expected to be aimed at the Asian gaming market. Although designed with this niche in mind, Gangster Gamblers plays great for everyone.


You can play Gangster Gamblers at the following casinos