AvatarUX Studios is a Hong Kong-based online slot developer that works in partnership with Yggdrasil.

The proprietary game developer offers Asian-influenced games to the European markets. The concept seems to have worked for Jackie Chan and Bruce Lee, let's see how these guys are doing with it!

Studios develop games in collaboration with the Swedish and Malta-based Yggdrasil Gaming, itself part of Cherry AB, est. 1963 in Stockholm.

A semi-open platform is provided for development and special bonuses, attraction, and retention tools are made available to be embedded in the games.

When a game is launched it goes out to more than 40 top tier operators who subscribe to Yggdrasil content. This opens the door to the entire European market to a small but highly talented company.

The studio's games strike a balance between captivating gameplay and awe-inspiring artwork. Their signature games become instantly recognizable to players who thirst for quality content.

Using Yggdrasil's power while maintaining an independent stance allows them to stay agile and respond to market changes and opportunities, rather than suffer the bloat of growing large too quickly.

The firm builds games from the math up. R&D is a big part of each game's budget as it moves toward creation and deployment.

Once the maths basics are done and a model can be played, it goes to the creative side for art and animation, sound and suggestions to integrate feature mechanics into the narrative.

The backs and forths among all team members as a title evolves create a rare harmony between all the elements by the time a title is in its finished state.

We can see the results in their first release, Lilith’s Inferno. On the front end it's a stunningly enthralling game with an epic narrative...

"In Lilith's Inferno players follow our demon on her journey to the gates of the blazing underworld..."

On the journey, she will need to slay all four keepers of the gate (high paying symbols).

Bonus spins are triggered by 3 or more scatters, but you'll have to get the Heroine through calamity into the Heros Bonus, past the beast, first. Fight off the beast and get bonus spins for every hit.

New symbols are added to the 5th reel during the bonus spin game. When you collect three, a 3x multiplier is applied to all remaining wins during the feature game.

If you fail to collect three, the one or two you do capture will be turned into wild symbols to appear at random after the final spin, potentially turning a struggle into success.

Another Hero Bonus, the Boss Battle, is triggered during the free games when you land two "VS" symbols. Each Boss that you beat's symbol will morph into a wild for the remaining spins.

Slay all of the bosses to turn all high paying symbols wild and fill the board with winning combinations.

Lilith awards up to 3968x bet for a perfect play on this mid-variance, 25 payline mobile-ready game with an RTP of 96.4%. The game deploys in nearly 30 different languages.

After "Lilith", the next tranche of games all featured a new mechanic dubbed,"Popwins" and each new game introduced a new feature.

The genre of "Asian-style slots" is wide and nearly undefined, but this one goes a long way toward setting benchmarks n excellence.

The game has plenty of eye-candy and action with 3D graphics, cool sound effects, and built-in gamification thanks to Yggdrasil.

A castle with futuristic elements draws you in to capture gems of great value. The gemstones can explode, expand, and multiply to create over 33,000 ways to win on a single "spin".

The soundscape will make your heart race and the 3D animations and effects will have you on the edge of your seat even if you are playing on a mobile device.

That's all great, it keeps you playing for the ultimate accomplishment in bonus play and one of the biggest payouts online of 72,1888x your bet.

The base game is played on a 5x3 reel set and pays right to left as well as left to right - taking a 243 ways to win game and doubling the possibilities. As the game progresses, so do the number of ways to win. A winning spin will add rows as well as reel positions to certain reels. The participating symbols will "pop" and be replaced by new icons.

Another subsequent win adds more and each additional paying spin will increase the win multiplier. The location of winning symbols helps determine the amount of added opportunity.

When the reel set is 7 positions high new features come into play.

Expect many small and empty spins, and watch the pops until you expand your winnings ways to the point than even the lowest paying symbols are fattening you bankroll.

The next release was Wild Pops.

Random wilds, extra lives, and plenty of ways to win with this win-both-ways game. Win up to 17,707x bet! It's the extra chances along with wilds landing out of nowhere that add excitement to this game, which is much like Poprocks.

The game has an RTP of 96.2% and a low hit frequesncy of just over 21% - on average, one out of five spins will have a win and or respins.

In order to trigger the random wilds, you'll need to put together three wins in a row but regular cherry bomb wild symbols can appear on any spin, as well as along with the random wilds.

The multiplier feature works differently on this game compared to its predecessor. 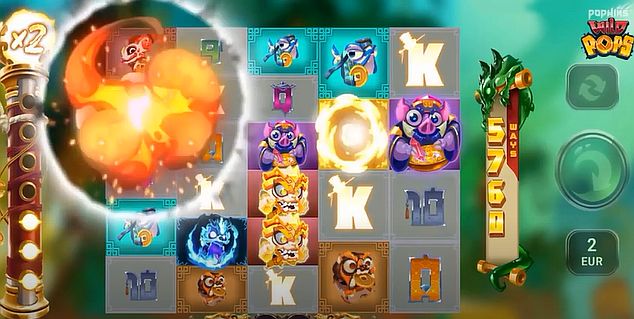 There's always a lot happening on the screen, so the game is as entertaining as it is potentially lucrative. Aside from the operator's maximum exposure per spin, there's really no limit to the amount that can be won because there's no limit to the multiplier factor, in theory anyway.

You can find these games at the casinos listed below. The list is rated by players and ranked by how well-received each site is over a long period of time. Real players rank the games at several sites in the LCB Network. Those with the highest player rating reside on the top of the list.

The games have been coming slowly, but right on schedule. The tight-knit group of artists, mathematicians, designers, and other developers work out each detail to perfection. While the games appear to be far more complicated than most slots, they are super easy to play, thanks to the way they are produced. We look forward to each new release and will review the games one at a time here.